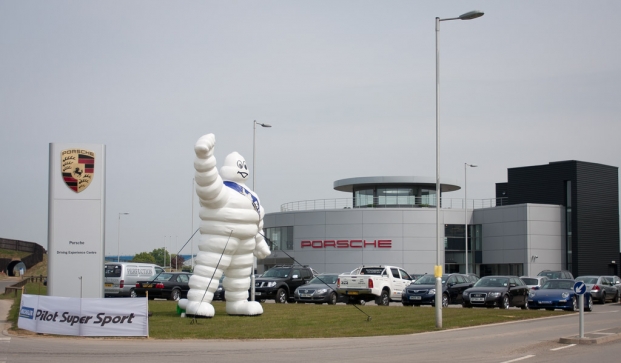 When Michelin announced that their well-regarded Pilot Sport 2 tyre was to be replaced, they also announced the arrival of two new tyres: a Pilot Sport 3, but also a new tyre sitting underneath the trackday Pilot Sport Cup in their range; the Pilot Super Sport.

The buzz surrounding the new Super Sport tyre - and the inital reports from the 599 GTO where it is the standard fitment - had it down as a track tyre, but useable in the wet. In fact, the Super Sport is a fully-fledged road tyre for normal road use, but also intended for drivers wishing to take their car out on track from time to time, with sizes available for cars ranging in size from an M3 up to a Veyron (or 599 GTO, obviously!). By contrast, the new Pilot Sport 3 is intended as a high performance road tyre for smaller, lighter cars up to the size of a Golf GTi or similar hot hatch.

Michelin claim better trackday wear, better road holding and braking in both the wet and dry with the Super Sport tyre, and better wear in normal road usage. These seem like mutally exclusive achievements, but it's down to two design choices by Michelin:

To demonstrate the differences between the Super Sport and other high performance tyres, Michelin lined up a fleet of matching vehicles at the Porsche Experience Centre at Silverstone, each fitted with different tyres fitted for back-to-back testing. I won't go into specifics of which tyre was  used for which test since some were very brief and it's hard to give in-depth views, but the rubber in question was from Michelin's chief rivals Bridgestone, Continental, Goodyear and other similar brands.

The first test was possibly the most revealing. Driving a  Porsche 911 Carrera S around the handling circuit showed the competitor tyre squirming, especially through the cambered, tight direction changes where the car felt like the chassis was rotating over the contact patches as the tyre sidewalls twisted. This layer of abstraction was gone with the Michelin, and the car felt as though the tyre tread was attached directly to the rim. The suspension movement was the same, but the feel from the tyre was more direct, more exact, which gave much more confidence, especially under trail braking. It was suprising quite how distinct the difference felt behind the wheel - I was expecting the change to be more subtle and nuanced.

The next test was straight line braking on the infield, in a BMW 3-Series Coupe. Braking hard from 53mph to a stop allowed the Racebox datalogger to calculate the stopping time and distance from 53mph down to 12mph, mirroring the upcoming European tests from 80km/h down to 20km/h. After a few runs the difference between tyres was only 0.1 seconds, but at speed this translates to a 2m (or 6ft) reduction in braking distance. At the end of the day, the data from all the attendees runs was averaged, and the average reduction was 2.3m or roughly 10% of the total distance!

Also on the infield was a wetted circle. A pair of front-wheel drive Audi TTs circled at speed to begin to get a feel for the tyre's performance in the wet. The difference was far more subtle, but the tyre felt both grippy and progressive.

The final test was run on the low friction tarmac loop, followed by a session on the kick plate, a hydraulic plate which leads onto a wetted perspex surface, simulating oversteer on sheet ice. This time the runs were all completed on Super Sport tyres, firstly in a Porsche 911 GTS, then a Cayman S. With the tyres consistent, it gave a chance to compare the 911 to the Cayman. Since this test didn't use the higher speed handling circuit, it became about comparing the stability management programmes and how responsive each car was when sideways.

Interestingly, the Cayman's stability programme appears to be fractionally more strict than the 911's. When fully activated, it allows very little slip, and whilst enabling sport mode does allow the car slide enough, it's only enough to corner but no more. The 911 GTS, however, was a little freer in normal mode, and required a dab of opposite lock in sport, though I couldn't help but feel that Porsche programmed this in to make the driver feel like a hero, rather than being absolutely required!

With the stability management switched off completely, the weight distribution became much more noticeable, as you'd expect, with the pendulum effect of the engine placement in the 911 requiring more correction initially, and then a definite move to bring the tail back in line. The Cayman was far more responsive both into and out of the slide, with finer movements needed and far, far less feeling of mass working against you.

It was only after the sessions on the kick plate that I remembered my inital expectations of this Super Sport tyre: a trackday tyre that also works in the wet. While the dry running was as expected, the progressive nature of the tyre in such low grip conditions was far, far beyond what I anticipated.

Rounding out the day was a few hot laps of the handling circuit in a 911 Turbo S. I'd never been in a 530bhp supercar before, and alongside someone who knew both the car and track layout, I probably shouldn't have uttered the phrase, "This is fastest car I've ever been in." That may have been a red rag to a bull, since as soon as we were on track, the throttle met the bulkhead and what followed was a completely alien experience.

It's hard to avoid use cliches like "mind-bending", "warp drive" or "lighting the afterburners" when talking about the kind of speed a 911 Turbo S can summon. As the revs rose and speed built at an alarming rate, my brain struggled to take in everything around it. It felt like all the blood was being pushed back from my limbs, and all peripheral vision blurred as it was discarded by what little capacity my brain had left. The braking points I'd used in the Carrera flew past before the ceramic brakes were squeezed late and hard, and the outside front tyres leaned on heavily. It was simply staggering performance, and from outside the car I never realised that the Turbo doesn't have a melodic engine note, but rather a noise akin to a jet engine tearing the sky in two as it sucks air into the engine. Stunning, stunning car.

I was suprised that over the day at just how different the Super Sport tyre was compared to the others on test. For those who do the occasional trackday and use a car on the road too, it's a class act. The feeling of the tyre in the dry does inspire confidence and I'd recommend it to anyone who enjoys driving.

The Super Sport will be available in a range of sizes from 18" to 22". The only fly in the ointment at the moment is that N-rated tyres for Porsche owners are not scheduled to come out until August 2012. However, this hasn't stopped some Porsche owners from fitting the new rubber anyway, and you can read more thoughts on how the new Super Sport performs on a Porsche from Drive Cult's Jack Wood in the next issue of GT Porsche magazine.

The Michelin Pilot Super Sport tyre
The Michelin-shod supercars lined up for hot laps
Porsche's LMP2 racer, the RS Spyder
Inside the Porsche centre, with quite a variety of cars on display.
The 997 Turbo S