Aston Martin has become synonymous with James Bond, but his creator, Ian Fleming, was a Bentley man. What would Fleming have Bond driving today?

There’s a new Bond film due out at the end of the year, called Spectre. As with many of the Bond movies, the car that 007 drives is of key importance and for the new movie it's been announced that he will drive a specially created Aston Martin known as the DB10.

Aston Martin’s history has been intertwined with that of Britain’s least secret agent ever since Q issued Bond with a DB5 in the movie Goldfinger. Over the years I've wondered what Bond’s creator, Ian Fleming, would have made of Bond driving an Aston Martin, because the literary version of Bond much preferred the Bentley marque. As a result, and starting with a history of the written version of the Bond car, I've speculated here what Ian Fleming would have Bond driving today if he were still alive and writing the novels.

In the literary timeline we are first introduced to Bond in Casino Royale. In the book Bond drives a grey 1930 Bentley 4.5 litre coupe convertible fitted with an Amherst Villiers Supercharger, effectively making it a blower Bentley although Fleming does not refer to it as such. Unlike the movie cars, this is a vehicle actually owned by Bond rather than loaned to him by Q Branch, and where the movie Bond treats his cars with disdain, the literary Bond clearly loves the car which is described as having been purchased nearly new. Unfortunately for Bond the car is seriously damaged when he goes off the road chasing Le Chiffre’s Citroën after the villain drops spikes on the road, puncturing the Bentley’s tyres. 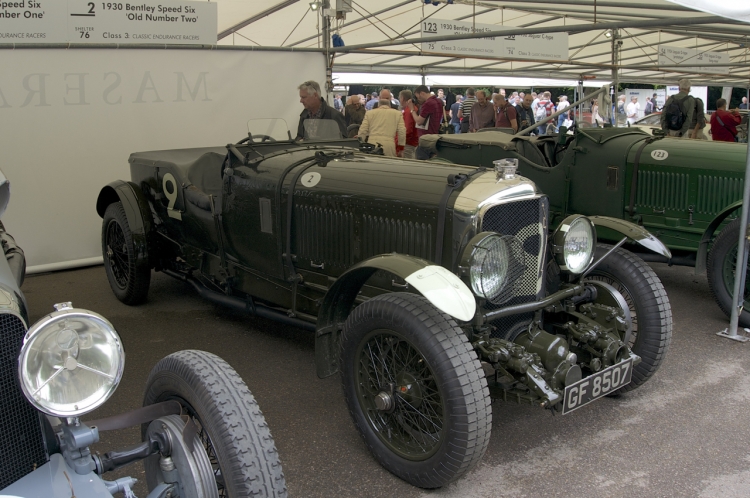 Bond has the Bentley repaired and it is heavily featured in the book Moonraker. This time, though, the car is finally destroyed when Bond crashes chasing Hugo Drax through Kent in his Mercedes 300S (not an SL as is sometimes depicted).  At the end of the book mention is made of Bond buying a 1953 Bentley Mk VI to replace it, but this is the only time that car is mentioned.

Fleming was clearly a fan of Bentleys; in the later books Bond acquires another Bentley, a Mk II Continental.  As with the 4.5 litre car, Bond buys the car second hand and this time in a wrecked state. He then has the car extensively modified with a custom body described as “trim and rather square two seat convertible affair”. Fleming was apparently inspired by his own Ford Thunderbird and wanted to see Bond drive something similar, although the exact style is left to the reader’s imagination.  Personally, I think of it as an open top version of the Gooda special racing Bentley. 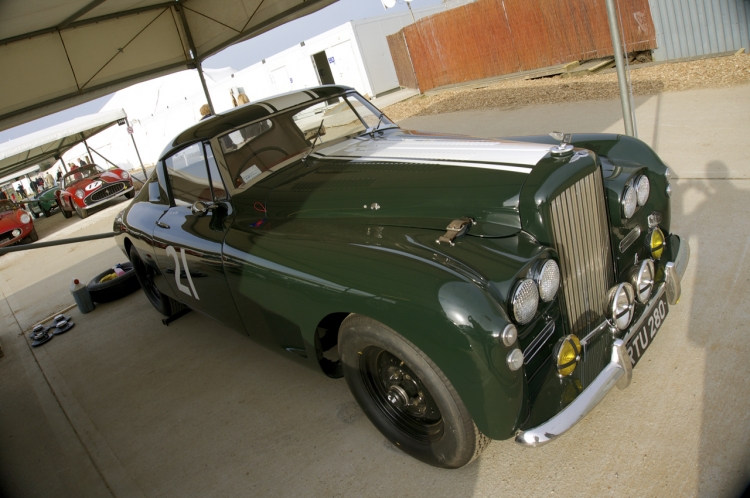 Bond also replaces the 4.5 litre engine with a larger 4.9 litre version from a later Bentley and has an Arnott Supercharger fitted, operated via a magnetic clutch. It would seem that Fleming (and by inference Bond) was a hot rodder at heart. The car is nicknamed the Locomotive and Bond is said to have “loved her more than all the women at present in his life rolled, if that were feasible, together.”

The Locomotive remains Bond’s personal car throughout the remaining Fleming novels and also appears in the follow-on novel Devil May Care by Sebastian Faulks.  More recently, the Bond book Solo by William Boyd has Bond getting rid of the now-outdated Bentley in 1969 and replacing it with a Jensen Interceptor Mk II after first test-driving a Jensen FF.

In one book, Goldfinger, Bond is issued with a car from Q Branch, and in order to tie in with the movie it is an Aston Martin – a DB2/4 Mk III which Fleming titles as a DB III. Bond chooses the Aston from the Q Branch pool in preference to a Jaguar 3.4 (presumably what is know known as a Mk1) as it suits his playboy cover story. It is also the only car in the Bond novels to be fitted with gadgets.  The producers of the Goldfinger movie updated the DB III to the then-current DB5 and the legend of the Bond movie Aston Martin was born.

What can we learn from the cars in Fleming’s novels that could influence the decision of what Fleming would have Bond drive today? Obviously Bentleys were his preferred marque, but there's also a clear preference for large, powerful open-top GT cars. Fleming was also fiercely patriotic so whatever he would choose today would have to be British through and through.

With Fleming/Bond’s preference for Bentleys it seems obvious to start with the Continental GT. Geoffrey Deaver agrees as in the rebooted timeline Bond novel Carte Blanche Bond drives a new Continental GT. However, Bond seldom purchased his cars brand new so I think Bond would look at the Supersport version from the previous generation. Available as a coupé or in Bond’s preferred drophead configuration, the Supersport featured a stripped-down two seat interior and a beefed-up 635bhp version of the regular GT’s twin turbo W12 engine.

Fleming would have appreciated the powerful forced induction engine and the slight hotrod vibe the Supersport gives off. However, I think he would also have a problem with his beloved Bentley being owned by the German Volkswagen Audi Group and the use of mainly VW parts in its construction. The books, written not long after the Second World War, have strong overtones of anti-German sentiment throughout and although the Supersport is the perfect car on paper I think Fleming would look for something with a little more British DNA. 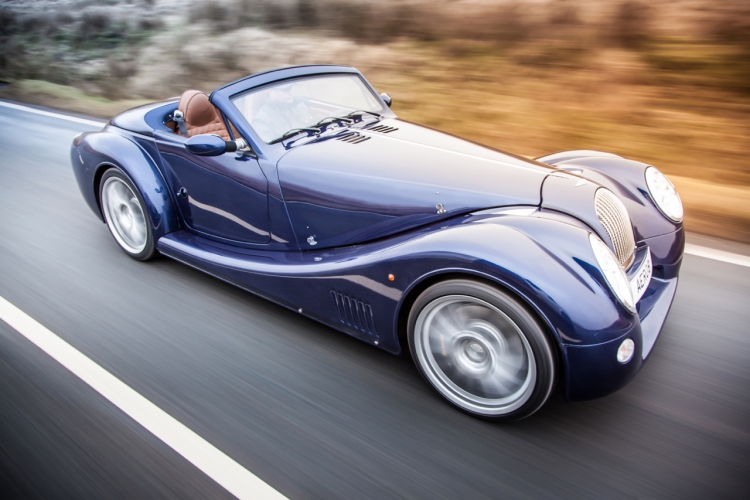 When Fleming was writing the Bond novels in the Fifties, Morgan had a range of small sports cars and three wheelers, none of which are suited to Bond. Today the Morgan Motor Company offer both the Aero range and the Plus 8, both of which might be to Bond’s liking. The Plus 8 Speedster probably offers the closest driving experience to the original 4.5 litre Bentley but is not a great long distance GT car to take Bond to Blofeld’s Alpine lair, so I suspect the newly revised Aero 8 would get the nod allowing Bond to get the wind in his hair when he wants to. Again, Fleming might quibble with the BMW engine fitted to these cars but I think the hot rodder in him would solve this with a line such as, “Bond found the BMW engine most unsatisfactory so had returned the car to the Malvern factory to have it replaced with a supercharged V8 Jaguar engine.”

The only possible problem with the Morgan for Fleming is that it might be a little too lightweight if Bond got involved in a car chase. 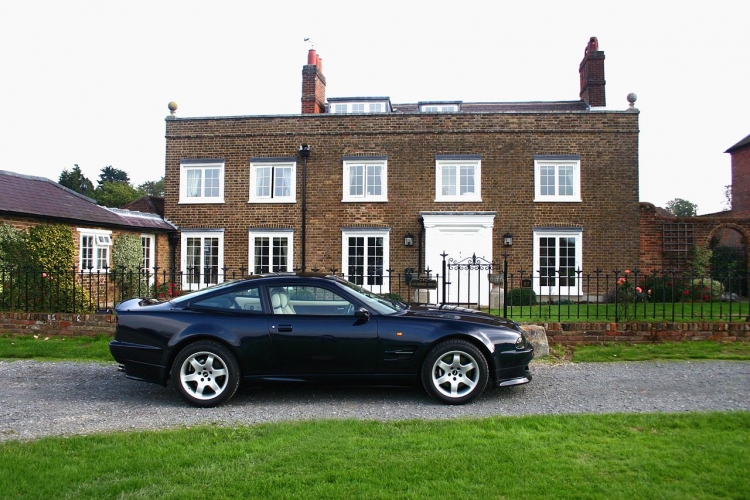 With the film version of Bond becoming synonymous with Aston Martin it is perhaps inevitable that Fleming would look at the marque for Bond’s personal transport. There are plenty of options among the ever-expanding VH range of Astons with the DBS appearing in a couple of the Daniel Craig Bond movies. However, I think that Fleming’s interest in forced induction cars means he would prefer the mighty V8 Vantage of the 90s with its twin supercharged engine.

The Vantage isn't the last word in handling but its muscular looks hark back to Bond’s original Bentleys. He would appreciate the power, too – 600bhp in the V600 versions, more than any current production Aston. A small number of open Volante versions were made but I suspect that one would be beyond Bond’s means on his civil service salary and family inheritance. Fleming could employ a similar trick to that used with the Locomotive and have Bond acquire a wrecked Vantage Coupe and have it rebuilt and converted to Volante specifications by Aston Works Service.

The only problem with the Aston and indeed the Morgan for Bond and Fleming is that neither of them are a Bentley. While Fleming might not be a fan of the Continental Supersport’s parentage, the Continental GT’s predecessor, the Continental R and specifically the short wheelbase T, would be much more to his liking. Built before the VAG takeover, the T sports a 420bhp turbocharged version of Bentley/Rolls Royce’s venerable 6 ¾ litre V8 engine. As that engine is still employed in the current Bentley Mulsanne and now upgraded to 535bhp in the latest Mulsanne Speed, it is perfectly reasonable to assume Bond’s T could have the engine upgraded as he did with the Locomotive to give his T the sort of performance to match his villains, whom I suspect Fleming would have driving AMG Mercedes.

There were even a small number of open Continental Ts made in the targa-topped Sedanca version. With used examples of the T around £70,000 one should just about be within Bond’s means and I can’t think of another car that fits the spirit of Fleming’s Bond cars more closely.

All other picture by the author.