Forza Horizon is a big departure for the franchise XBOX 360 racer. We gave it a spin at this year's E3 conference in Los Angeles.

Racing games are great. As car enthusiasts they allow us to practice our Nordschleife laps from the comfort of our living room couches, try all sorts of twisted automotive experiments (what would happen if I put a 5.0 liter V8 in a Mk1 Focus?) and live out our boyhood racing driver fantasies. But there’s always been one big inherent problem with many racing games: they’re very limited in that you as a player are restricted to what ever race track you’re on.

Forza Horizon is a spin-off of the hugely popular Forza Motorsport series (now on its fourth iteration) produced by Seattle’s Turn 10 Studios that will attempt to address these limitations this October. So, what exactly is Forza Horizon? It’s a multiplayer, open world driving game set in the state of Colorado, with the fantastic Forza physics engine dropped in. At least, that was the claim. More on this in a bit.

We were able to get a first-hand look at the Forza Horizon demo at this year’s E3 video game conference in LA. The game centers around the Horizon Festival, which is sort of a virtual Coachella-like gathering of hipster car enthusiasts featuring live music, dance parties and street racing. I can almost hear your groans through the speakers in my MacBook Pro, but stick with me.

A variety of events will surround the Horizon festival, including races, time trials, drift competitions and even some Top Gear-inspired zaniness like racing against planes! Throughout the game you’ll gain popularity points for not only doing well in these events, but also by creating combos using drift maneuvers, blowing through speed traps and generally driving like an ass. 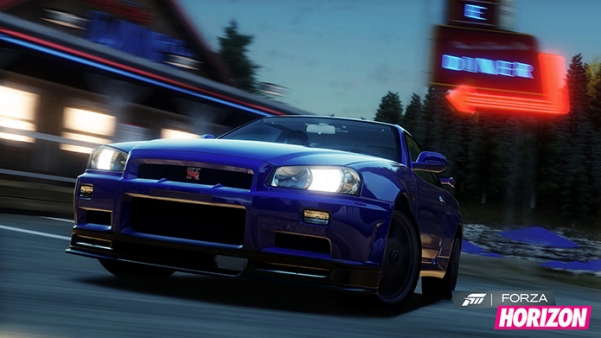 At this point two things are immediately evident. The environments look amazing, and this doesn’t feel anything like the Forza games you’re used to. You're on a rural road at dusk, hauling ass, V10 wailing through a mountain pass. Your competitors come from behind you and from dirt access roads in an attempt to pass you. It’s all very high speed, frantic and fun. All the while, the sun gradually sets in the distance and by the time you reach the finish line it’s night. It’s not the first racing game to have day to night cycles, but combined with the hyper-realistic environment it looks absolutely stunning. 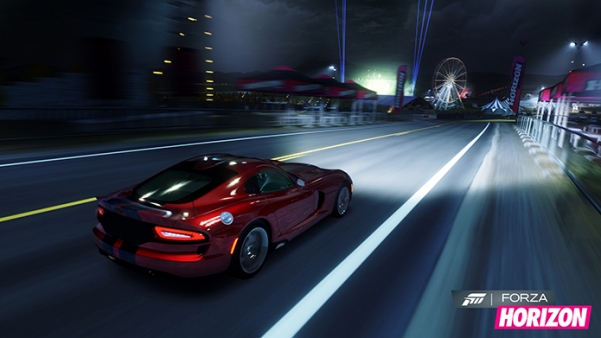 Now about that thing I’ve hinted at twice now; the physics. Forza Horizon feels much more arcade-like than other Forza entries. Turn 10 says that this is the same physics engine used in other Forza games, but it’s clearly a heavily tweaked version. Braking feels somewhat optional for most turns and you aren’t punished for making boneheaded mistakes the way you are in Forza 4. To me this was a bit disappointing, since I really was hoping for an open world racer that used the fantastic Forza physics I’ve come to love so much.

After an initial play through, I commented to one of the Turn 10 staffers on hand that if felt more arcade-y than I had hoped. Judging by the look on his face, “arcade-y” was not on their list of marketing buzzwords, but he did suggest that I try it again with TCS, ABS and stability control turn off. I obliged, but it still wasn’t what I was after.

So, will I buy Forza Horizon when it come out on October 23rd? Definitely. The prospect of exploring that huge, beautiful environment should be enough to keep me interested for months. In addition, the fantastic Forza livery editor, tuning options, car selection and marketplace which make for such a vibrant gaming community, will also be making their way to Horizon.

Turn 10 has always been excellent about making the Forza series accessible and fun for both hardcore sim fans and novices alike. I just wish Forza Horizon would reach out a little more back to those who helped make the franchise such a success in the first place.