The Daytona on the lift in the workshop, ready for fettling

After seeing heavy use during last year's balmy summer, the Daytona receives some mechanical attention over the winter.

Readers will recall that in my last update on life with the Daytona that a few mechanical issues had cropped up.  As so happened, the car was due for a service anyway, so the day after returning from the Journées d’Automne event I took the car over to my Dad’s workshop for so that our mechanic Vince could begin a winter overhaul.

My original intention was that the service would take place and then Richard Tipper of Perfection Detailing would come down to give the car a thorough detail. However, on inspection Vince noticed that there was still large amounts of oil residue all over the engine bay from the failure of the power steering line, and suggested it might be better to get the car detailed first.

A few days later Richard obliged and provided his usual excellent service to clean off not just the oil but the 800 or so miles of road grime that had built up on the trip to France. The coat of wax that Richard had previously applied had stood up rather well to the trip but a second coat was still applied to make the bodywork really pop.

With the car now looking its best again Vince set to work on the mechanicals. On the last day of the Journées d’Automne the brakes had taken to grumbling and squealing a lot, and inspection revealed that the callipers could do with some refurbishment.  In addition, the rear suspension bushes were heavily worn and needed to be replaced. This may partially explain the sometimes wayward handling the car was suffering from, particularly in wet conditions. 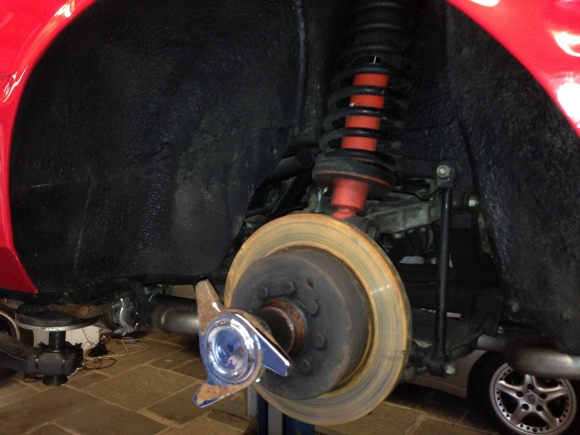 Under the bonnet the usual fluids were changed and new spark plugs were installed. Rather than go for the usual NGK plugs, we've decided to try out some Denso Iridium plugs. These are supposed to give better ignition at a lower spark voltage and as a result reduce misfiring. Denso also claims slightly improved acceleration from using these plugs. I’ll see how they go over the summer and if they turn out not to work well with the Daytona I’ll switch back to the NGKs.

With all this done, the only thing left was to tune the sextet of Weber carburettors. However, as Vince was in the process of doing this he noticed that oil was weeping from the main oil pipe that threads a serpentine path from the dry sump oil tank all the way around the engine. Clearly this needed replacing as well, which turned out to be far from an easy job. The pipe had to be custom-fabricated, but at least it didn’t require the engine to be taken out, which would have been the case if the rear cam seal had failed. It still meant that the freshly replaced oil (all 15 litres of it!) had to once again be drained. 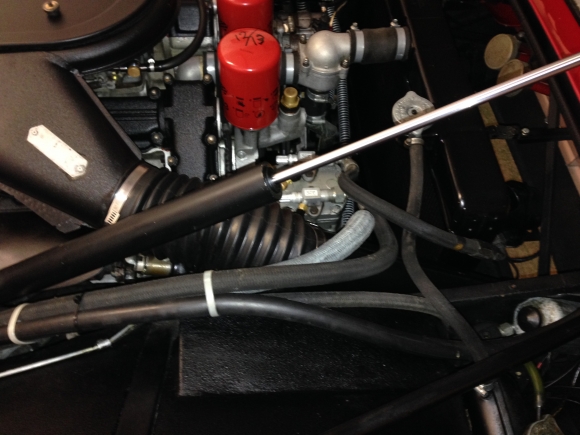 With the oil pipe replaced and the car properly tuned, Vince has given the car a test drive and is pleased with the results. Despite the bad weather that has left much of southern England flooded, I’ve managed to get a couple of short drives in and everything seems to working fine. With the new oil pipe in place the drip trays in the garage are now free of oil as well. This week the car was also put through the annual M.O.T. inspection which it passed with flying colours.

Meanwhile in the wider classic car world, prices of Daytonas have been steadily rising over the last few months. An example sold at the recent auctions in Scottsdale Arizona for over $600,000 and dealers are asking upwards of £470,000 for the very best examples. For the most part this is of little consequence to me as I have no plans to sell it, but since the car is insured on an agreed value basis I’ve had to up the agreed value three times in the last twelve months. I have to get an independent valuation done each time, so this is something of a pain.

The car has also made another appearance in the wider media.  Keith Adams has moved from Octane magazine to working for Honest John Classics, and has written a new piece on Daytonas using our trip to Reims in 2012 as a basis.  You can read the article here (the eagle eyed might spot that the engine bay picture is from another Daytona).

Rising values won’t stop me from driving the car though, and with the car newly refreshed I can’t wait to get it out on the road again.