The second of Drive Cult's guides to the classic Ferraris.

I’ve been getting rather annoyed with all the baloney on the internet about the Ferrari FF not being a proper Ferrari. It does seem to me that far too many people seem to think that Ferrari's road car history began with the Eighties Testarossa, and have no knowledge of Ferrari’s rich history which dates back to the 1940s. For me, and many others, the essence of a Ferrari is a grand touring car with a big V12 engine in the front, not a mid-engined rocket ship with a screaming V8.

With the above in mind, here is Drive Cult’s second feature delving into Ferrari's history, where we attempt to explain the different models. In the first feature we concentrated on the 365 Ferraris with their 4.4-litre V12s, but this time we’re going to step back to the mid-Sixties and discuss the 3.3-litre 275s and the 4.0-litre 330s. As before, I’m sticking to the road cars and series production models. 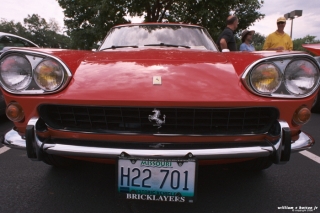 Introduced in January 1964, the 330GT 2+2 is, as the name implies, a grand touring car with room for four people (more or less). It’s equivalent in the current Ferrari range would be the FF.

The four-litre V12 is a single cam per bank unit and with its triple Weber carburettor arrangement is rated at 300bhp. The suspension followed what had up to then had been Ferrari’s staple of double wishbones at the front and a live rear axle with semi-elliptic leaf springs at the back. Early cars featured a four-speed transmission with overdrive.

Styling-wise, there were two distinct series. What are now known as Series 1 cars sport a four headlamp arrangement at the front. To be frank, this is pretty ugly, and makes the car look like some of the Sixties Austin saloons, which were also designed by Pininfarina. Clearly Ferrari agreed with me, since later Series 2 cars featured a single headlamp design more in keeping with the rest of the Ferrari range. The Series 2 also featured more stylised louvres on the flanks. The only mechanical difference is that the Series 2 has a five-speed gearbox.

As with all Ferrari 2+2s, they are not at the head of the queue in the desirability or collectability stakes, and a few have been cut up to make Ferrari 250GTO replicas. For a good one expect to pay around £80,000 - £100,000, with a Series 2 example making a little more. 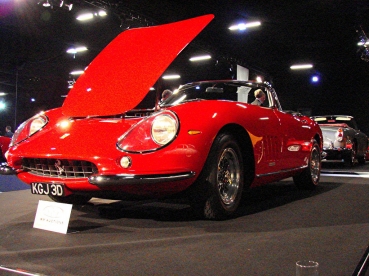 The Paris Auto Salon has been the venue for the public unveilings of many Ferrari Berlinettas. The 1964 show featured the debut of the 275GTB. Compared to today’s Ferrari range, the 275GTB is the closet equivalent to the 599.

The car was clearly an evolution of the 250GTO road/race car that had preceded it. The wheelbase was the same 2.4 metres as the 250 (and all of the other two-seat berlinettas from the 250SWB, up to and including the Daytona). However, the 275 did sport two important innovations for a road Ferrari: independent rear suspension and a transaxle gearbox arrangement.

The independent suspension was not a big issue for Ferrari as their racing prototypes had been running this for a number of years, but the transaxle did cause a number of problems with vibration in the car, due to alignment issues between the engine and gearbox. Ferrari ultimately fixed this by mounting the propshaft within a torque tube, and you will often hear of 275s up for sale as being referred to as fitted with a torque tube.

It wasn’t just the transmission that Ferrari fiddled with with over the three-year life of the 275. Early cars had a relatively large grille opening at the front, and unfortunately this shape was found to promote lift at high speed. Wind tunnel testing was very much in its infancy for road cars, and it's unlikely that the 275 underwent any serious aerodynamic testing. Ferrari cured this by extending the nose slightly and making the grille smaller and more ovoid in shape. In the process, they also improved the looks to create what I consider to be one of the best-looking Ferraris.

Ferrari claimed that the 3.3-litre single cam per bank V12 was rated at 280bhp, but I suspect that the optional six Weber carburettor set up was needed to achieve that. Towards the end of the 275’s life it suffered in the power stakes against upstart rivals such as the Lamborghini 350GT and the V8-powered Iso Grifo. Ferrari’s response was to fit a new four-cam version of the 3.3-litre V12, creating the 275GTB/4. The additional cams lifted power to 300bhp, and gave what has now become known as the 4 Cam a 166mph top speed. Styling-wise, the 275 is distinguished from the earlier cars by a bulge in the bonnet.

The 275 came with a steel body as standard, with alloy doors, bonnet and bootlid but in a nod to Ferrari’s racing roots, a lighter completely alloy body was available as an option. This would save weight, but the thinner gauge metal dented a lot more easily. The alloy cars can be identified by the rain gutter above the doors; this extends about an inch further beyond the door frame on the alloy cars to cover up an extra weld that was needed.

Not to be confused with a regular alloy 275, Ferrari also built a number of competition-prepared 275s, known as 275GTB/Cs.  These can be identified by additional vents behind the rear wheels, outside filler caps and very high price tags! Three of the 275GTB/Cs were specially prepared with ultra-lightweight aluminum bodies with noses that resembled those of the 250GTO (or 330LMB), reprofiled rear ends and are commonly known as Speciales. In everything other than name, these cars are direct sucessors to the 250GTO and really should have been called 275GTOs. The 275 won the GT class at Le Mans for three consequtive years from 1965 to 1967.

Lastly, as a semi-official model Ferrari built ten 275GTB/4s as convertibles for the American importer Luigi Chinetti. These are known as N.A.R.T. Spyders, after Chinetti’s racing team. Although not a commercial success when new - Chinetti had expected a run of twenty five cars rather than the ten that were made - the N.A.R.T. has become one of the most prized Ferraris of all, and you would probably need at least £2 million to secure one in today’s market. Steve McQueen brought one of these when new, and if that car ever came up for sale in the open market it could end up being one of the most expensive road Ferraris ever sold.

While not quite as prized as the N.A.R.T cars, regular 275s have appreciated considerably over the last few years, especially the 4 Cams which can now command over £700,000 at auction. Personally I would eschew a 4 Cam and go for a late 2 Cam with the longer nose, torque tube and optional six carb setup. Even this will probably set you back at least £500,000- £600,000, though. 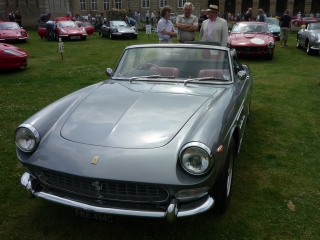 Launched at the same time as the 275GTB, the GTS shared the Berlinetta’s engine (although Ferrari claimed the GTS only had 260bhp), chassis and drivetrain, but sported a completely different body. The elegant and understated GTS was clearly designed for wafting along the Rivieria with the roof down, rather than tearing around a race track. I’m not sure the GTS has a direct equivalent today, but the California must be closest in terms of philosophy.

One unusual feature on early GTSs was that the passenger seat was slightly wider than the drivers, possibly so the car could act as an emergency three-seater. However, this idea was quickly dropped!

In sharing the GTB’s drivetrain, it also shared that car's vibration issues, but the GTS never got the developments which resolved the issues on the GTB, and all cars featured the open driveline.

Jeremy Clarkson has described the 275GTS as the most beautiful car ever made, but I must admit that the GTS has never really appealed to me. Plenty of people share the curly-haired one's opinion though, including Steve McQueen who again bought one of these new, and you can expect to pay at least £400,000 for a good one. 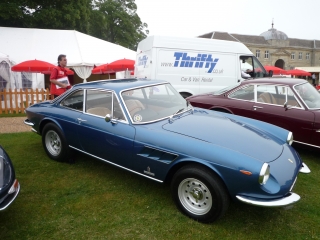 The 330GTC is something of an amalgam of the cars I have already talked about. Launched at the Geneva Salon in 1966, the GTC used the chassis and updated transmission of the later 275GTB, the 4.0-litre engine from the 330GT 2+2 and enclosed them in a body that is clearly a development of the 275GTS, albeit with a closed roof. At the Paris Salon the same year, Ferrari unveiled the inevitable open-top version, the 330GTS, which replaced the 275GTS.

Again, I’m not sure there is anything in the current Ferrari range that directly compares to the GTC, but once more the closest is probably the California.

It would be easy to write the GTC(S) off as a parts bin special, but in fact this mix and match approach produced something of a triumph, since the GTC in particular is one of the best Sixties Ferraris to drive. The torquey 4.0-litre unit is an easy match for the smaller more peaky units in the 275, and the slight power increase over the 2 cam 275 compensates for the heavier body. The only thing that really lets the GTC down is its unassuming looks. It’s not that the GTC is an unattractive car - far from it - but its shape does lack the raw appeal of the 275GTB. The GTS is a very good open car, but the upright windscreen does mean that the occupants get rather buffeted with the roof down. This can resulting in the car looking elegant on arrival at the Hotel de Paris in Monte Carlo whilst the same could not be said of the occupants!

Today the 330GTC is conspicuously good value when compared to the 275 (if not in the wider car market) since the best examples are likely to be around £200,000, less than half the price of a 4 Cam. However, the GTS costs rather more, partly because it is a convertible but also because it is rare, with only 100 examples being made. You will probably need to find at least £500,000 today to own one.

I've been fortunate to have had some experience of almost all the cars listed here (with the exception of the 330GT 2+2), and picking one to have in my fantasy car collection is very difficult.

If money were no object, a Ferrari 275 4 cam N.A.R.T. Spyder would have to be there, since in my view it's the most attractive convertible ever made. The standard 275GTS lacked development and the 330GTS suffers from too much buffeting with the roof down. The 330GT 2+2 is probably a nice car and in Series 2 form looks okay, but I can never see myself wanting one more than a 330GTC, and if I needed the extra space I would look at the later 365GT 2+2.

Choosing between the 330GTC and the 275GTB is quite difficult. The 275 has it easily in the looks department; its shape fits so well into that classic Ferrari Berlinetta line that started with the 250GT and continues today with the 599. For everything else though, it has to be the 330GTC. Fun to drive, usable and at today’s high prices, a car that you only need to give one part of your anatomy to be able to afford! As an all-round choice, the 330GTC is the perfect Sixties Ferrari.

Photo credits: Ferrari 330GT 2+2 image by William C Hutton Jr via Flickr. All other images by the author.

N.B. I could have included the Ferrari 330 America in this listing, but since that car is essentially a Ferrari 250GTE with the 330 engine I have followed the convention that this should be considered part of the 250 series.