What is your car's limit? Or rather, where are your car's limits? Alastair Preacher attends a high performance driver training day and realises he has a lot to learn about driving technique.

If you're like me you'll have a history of tweaking and fettling your pride and joy in the eternal search of enhancing its performance. Uprated exhaust, more powerful brakes, new coilovers, the list goes on. How about a new head, cams, intake and ECU? Don't mind if I do! But what about the driver; how about upgrading you?

This is something I've long wondered about but have always found excuses not to follow up on. If I'm honest, the major reason holding me back has been the cost/benefit question: how much useful information would I actually gain from driver training, as opposed to buying a performance upgrade for my car, or attending a track day? Like many enthusiasts, I don't think twice about spending significant amounts on a single day's track action, not to mention the fact I drive a Lotus which brings its own fiscal challenges, but the thought of spending a few hundred pounds on advanced driving tuition somehow seemed less beneficial than a day's lapping at the Nürburgring.

Now, I don't think I'm some sort of driving God that can't improve. I know I'm not perfect, but statistically I am a safe driver and I'm not a racer chasing lap times either. Why bother paying £880 (between 4) for a day of shared tuition from someone like Andy Walsh at Carlimits, when I can get tuition and plenty of practice on the regular trackdays I do?

Yet many people I know do go, and every one of them rate the day and experience very highly. Plenty even go back for more. Faced with such evidence, curiosity got the better of me and I booked a Carlimits day in mid-December.

The day was held at an airfield in deepest darkest Essex, and as usual for such places it was stark and windy. But at least the gate was manned by a cheerful chap despite probably being sick to death of punters rocking up in sports cars asking for directions (turn left behind the Portacabin, since you're asking). As the other attendees hadn't turned up yet, Andy took me out for some tests to assess my driving. As with any first lap at a new track, I was healthily nervous and attentive, and wondering how I'd fare under Andy's expert gaze. The tests consisted of an emergency stop and some very slow speed figure-of-8s around two cones. I thought I did OK, even though I did lock up a bit on the emergency stops.

However, Andy had other ideas. He immediately told me I was steering incorrectly and braking sub-optimally. Great start, I thought, only acceleration to go and I've got the whole set! However, before Andy could bring me down to earth even further, the other attendees arrived, so while Andy reacquainted himself with them (all of whom were repeat customers), I spent the next 20 minutes practicing my new steering technique.

Once we were all ready, we spent the rest of the morning tackling a long fast left-hander approached from the end of an access road that crossed the airfield. The idea was that you approached the corner at speed and tried to make it round without spinning or crashing into the imaginary "Wall of Impending Doom" represented by the drainage ditch that runs down the middle of the runway. We set off one at a time, as soon as the car in front had completed their run. This allowed us to safely repeat the corner over and over and meant Andy could jump in any of the cars as a passenger or driver and teach several techniques for the corner, depending what he felt you should practice.

I was practicing high-speed corner entry and after I thought I'd gone as fast as I could, Andy jumped in and managed to get me going round just as fast steering with just one finger! Eye-opening does not even begin to describe it. After a few more runs he surmised that I needed to practice going sideways and recovering, to get used to the new steering technique he'd taught me. Officially sanctioned oversteer? Excellent.

Suffice to say the rest of the morning passed very quickly, with lots of squealing sideways action. Repeating the same corner over and over again really helped me try several different techniques and learn in a way I've never done before – and I definitely began to undo several years of bad technique that had built up. 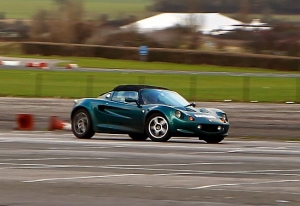 However, my head was bursting with new information and at times of duress (read: unexpected and lairy 90mph slide), I slipped back into my old ways, forgot to use the technique for quickly applying steering lock I'd spent the morning practising, and ended up somewhere through the Wall of Impending Doom. Andy confirmed that this loss of discipline under duress is common, so in the afternoon he set up a sprint track session to create the sense of pressure you experience as you chase a lap-time, to try and train this bad habit out. After a lap showing you the track, then another showing the common mistakes people make, Andy did a fast lap in each car, to set a time for each driver to chase. At 55 seconds, he ended up a massive 5s quicker than my best time of the day!

He then did a few really eye-opening sessions in the passenger seat with me, getting me to experiment with different techniques. I tried some of the techniques I'd learned in the morning, like braking into and through corners, maximising exit speed instead of entry, balanced throttle vs. trailing or turning without using the steering wheel, and I could see the impact on my lap-times immediately. Moreover, as the attendees on the day then passengered in each other's cars it was bloody good fun, too – especially since I was running identical lap times in my Elise to my friend Ben in his 964; we were trading best times all afternoon.

Sadly, this chasing of times only helped accelerate the speed with which the winter's eve drew in and the fun was over all too quickly. Only on the drive home did it really dawn on me just how valuable the day was. It's difficult to express just how much information I've taken onboard; I've started to unlearn the bad habits and potentially unsafe traits in my driving technique that had built up over time, I feel far more confident in what the car will do on and over the limit and most importantly I know I am now a safer driver.

So was it worth it? Yes, without a doubt. Not only will the skills taught make me a safer driver, but they will undoubtedly make me a more capable driver too, which in turn will help improve my driving on track. Perhaps the most interesting thing is that I am now also more aware than ever of what else is possible and how much more I have to learn. I'm already looking at booking another day at some point in the New Year. It looks like I have yet another expense category to add to the car's running costs now!

When I was learning to drive, like many of you I was taught to hold the steering wheel at 'ten to two'. However,  while this is fine for everyday road driving, in more extreme situations you need more control over the steering wheel. Andy had me move my hands down from my default 'ten to two' position to 'quarter to three', and made me grip the steering wheel just lightly enough to maintain control whilst still allowing movement between my fingers. The rationale for this hand position on the wheel is that it creates the widest leverage between one arm and the other, allowing you to steer as much as possible, as quickly as possible, without taking your hands off the wheel.

This might seem very basic and obvious advice to some, but it’s definitely not something I had tried before, and initially it felt distinctly odd. Holding the wheel at ten to two was something deeply engrained into my subconscious and even after the Carlimits day I still have to consciously remember to move my hands down on the wheel to quarter to three.

So, what are the benefits of holding the wheel in this position? Imagine you're going from full right lock on the steering wheel, to full left lock. Holding your hands at 'quarter-to-three', as you turn the wheel left, at some point you’ll reach the end of your ability to turn the wheel. Your arms will probably be at a 'twenty to two' position, and tightly crossed. Now, remove your original leading hand (left in this case) and move it from beneath your right arm to above your right arm, and grasp the wheel again on the far opposite side to your right hand. The leading hand is now top rather than underneath, and your hands are back in the optimum quarter to three position on the wheel relative to one another, so it's easy to continue to turn the wheel farther and more quickly.

I practised this method of repeatedly switching from full lock to full lock in figure of 8s for about 30 mins, and initially I didn't find it particularly useful. However, later in the afternoon the reasons behind it became very clear, as I found myself pirouetting merrily in a cloud of tyre smoke after a 90mph spin. I'd caught the initial slide but as the car snapped back the other way, in the heat of the moment I panicked and reverted to my old method of steering and wasn’t able to control the slide since I had no idea where centre was on the wheel. I was over- and then under-correcting the car as it fishtailed wildly, but never able to apply the correct amount of lock quickly enough to bring the car back under control.

Chastened, I resolved to try harder, and when I found myself in an almost identical slide a few goes later, I remembered to use the new steering technique and was able to control the slide easily. Being able to quickly wind lots of steering lock on or off as the situation requires is crucial to controlling a sliding car at high speed, and the Carlimits training will be invaluable the next time I find myself on a wet track day with an armful of oversteer!

Alastair has a taste for the less cosseting end of the motoring spectrum, owning both a race-prepared E30 BMW and an S1 Elise. He can most often be found on track, at the garage getting the Lotus fixed (naturally), or trying to convince his long-suffering wife that the Eifel mountains is the perfect family holiday destination.