At both the Geneva show and the Goodwood factory, Rolls Royce unveiled the Wraith. We went down to have a look for ourselves.

As the covers were pulled off the car in Geneva, a group of journalists and bloggers were being treated to an similar unveiling deep in the most secret area of the Rolls Royce factory. The third Rolls Royce model was revealed: the Wraith. 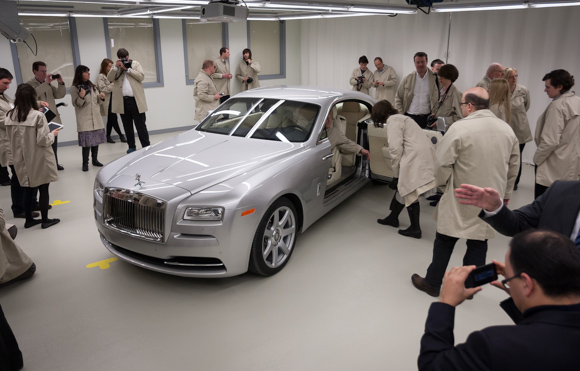 While the Wraith names harks back to a series of Rolls Royce cars from the late 1930s, this is a new car aimed at a different type of driver to Rolls Royce's existing models. While the Phantom lead to the Phantom Coupe, the Wraith is not simply a coupe version of the existing Ghost.

Described as a Gentleman's Gran Turismo by Rolls Royce, the design is a sportier take on the current Rolls Royce design. The bonnet is 2 inches longer, the classic grill features vertical strakes recessed into the grill so the intake apes that of a jet engine, and even the Spirit of Ecstacy sitting up front is canted forward four degrees as a statement of sporty intent. To my eye, the car sits low over large, seven spoke wheels which show much more of the brakes than other Rolls Royce cars, and again adds to the sporty look. 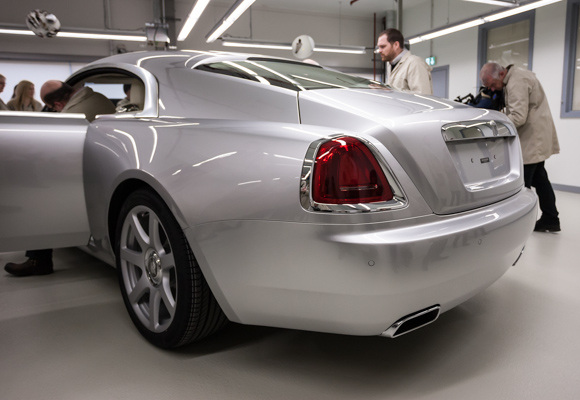 The fastback design up close

The big design departure is at the rear, where a fastback canopy gives the Wraith a distinctive profile - not unlike the classic Bullitt-shape Mustang. Inspiration was apparently taken from the world of boat design, but it's probably the one element I'm still not entirely sold on. 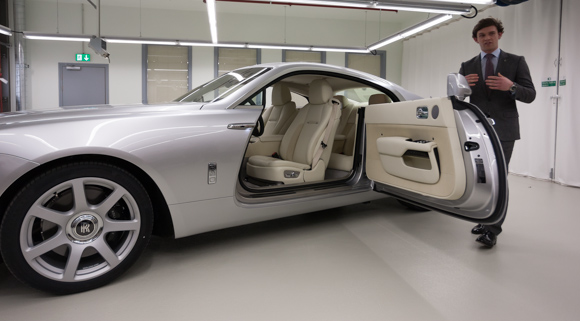 The interior being presented by one of the design team

Inside there is a nice evolution of the Ghost interior, with a rotary knob with a touchpad integrated into the top to control the many functions via the large in-dash screen. In keeping with the idea of a more performance-led model, Rolls Royce have chosen a smaller diameter, but thicker-rimmed steering wheel. I'll come back to this later. 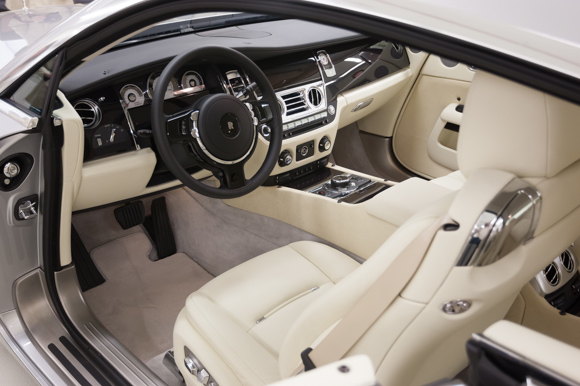 Under the bonnet sits a 6.6 litre, twin turbo V12 engine producing 624bhp and 590lb/ft of torque, which is enough to reach 62mph in just 4.6 seconds. On top of that, the gearbox control software will apparently linked to the GPS in production models, so the gearbox knows what the road ahead will be like and can react appropriately. It's a brilliant piece of lateral thinking. Sadly the car on display was only a prototype and wasn't available to drive, so I can only hope this will work as seamlessly and intuitively as it sounds. The base price of the car is expected to be around €250,000, with production starting in the autumn.

Walking around the Wraith, it immediately strikes you how contemporary and somehow technical it looks. The lower grill has some floating elements and running light slots which are far more modern than the Phantom or Ghost, and the wheels look chosen for performance, rather than the large shield design items fitted to other cars, which look designed in such a way as to protect the owner from that beastly mechanical hocus pocus that makes the car work but that Sir should not concern himself with. The way the roofline is mirrored in a nice pressed ridge around the front doors is very pleasing. The fastback approach won't be to everyone's tastes, but I think it generally works. It also means an owner can now go from front to rear number plate in a contrast colour, which in the press photos certainly accentuates the fastback shape. Oddly, the design also makes the rear lights more of a statement, and a stronger design element. 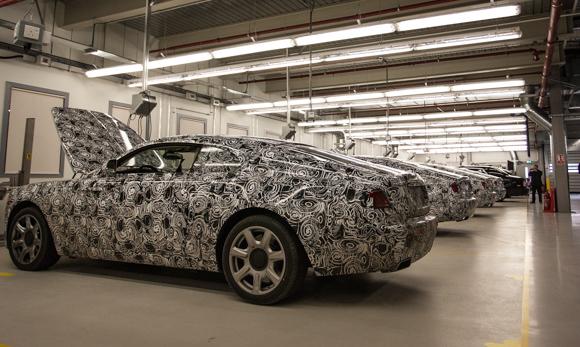 Wraith prototypes lined up at the factory

Unfortunately there were no Wraiths available to drive, but I did get to try my hand at driving the extended wheelbase Ghost I was taken to the Festival of Speed in last year. The drive was too short to fully take in the breadth of controls and functions at my disposal, but even through the centre of Chichester the Ghost's role is clear. It is designed to get from point A to point B smoothly and comfortably. The controls light, the steering suprisingly quick and direct, the car level, and pot holes or ruts were communicated to the driver without ever disturbing the driver. It's a big car, so it's not exactly nippy, but not the handful I'd worried about.

My Ghost, if only for a few minutes...

One delight was the thin-rimmed steering wheel wrapped in superbly soft leather. It has the feel of an expensive fountain pen, or the stem of a crystal champagne flute. By comparison, after driving the Ghost, grasping the steering wheel in my M3 felt more like grabbing a beer can. There is a widely-held belief in the motoring industry that chunky steering wheels are sporty - unlike any racing car's steering wheel that I've ever seen - and this trend has pervaded the Wraith. I'm sure Rolls Royce would happily fit a thinner rim if a order came in requesting it, but I'll be interested to see if this quintessential Rolls Royce touch will be adapted in production Wraiths, or if the performance and GT nature of the car will suit a thicker wheel.

From what was shown, it's clear that the Wraith is a distinctly new direction for Rolls Royce. The combination of high power, sharper styling and the promise of comfortable touring is something that Rolls Royce will hope attracts new buyers, and I'm sure it will. The real test will be seeing if they can put enough distance between it and the Ghost, and making the old and new philosophies work together.