It was a busy summer for the Daytona, with a couple of real highlights and a few issues too.

The Daytona has been out on most of the dry weekends for events and activities at Brooklands, Goodwood and the monthly Classics and Cake meets in Brentford. There’s too much to write about to go into detail for every event so for this update I'll concentrate on the two highlights, namely the Shere Hill Climb and another magazine photo shoot, this time for Classic Car Weekly.

To be honest I’m not a regular reader of Classic Car Weekly (CCW). I never seem to have enough time to fully read the magazines that I do buy and the vast majority of CCW's subject matter is not about the type of cars that really interest me. However, it's now edited by my friend Keith Adams, who you may recall was the journalist that drove the Daytona on the trip to Reims for Octane magazine back in 2012.

Keith got in touch to ask if I would be interested in doing a photo shoot with the Daytona at Bicester Heritage in Oxfordshire. The subject of the shoot was to assemble the cars that the respective journalists at CCW would like to take to the Goodwood Revival and Keith chose the Daytona after his experiences from our trip three years earlier.

I hadn't been to Bicester Heritage before; it's an old RAF airfield that has been converted into an industrial park for specialists in classic cars. It retains most of the old buildings from its RAF days and makes a great location for a photo shoot. It’s also quite a sight to see so many old classic cars moving around the roads within the park.

The shoot itself was a mixture of static shots and some tracking work on the old taxiways that are now used as a small test track. CCW had assembled an eclectic mix of cars with the Daytona being joined by an Aston Martin DB4, an early Austin Healey 100, an Austin Cambridge and a Vauxhall Velox. The Cambridge and the Velox are interesting period pieces and I really liked the DB4 and the Healey although the reverse-pattern 3-speed manual gearbox on the Healey would certainly take some getting used to. 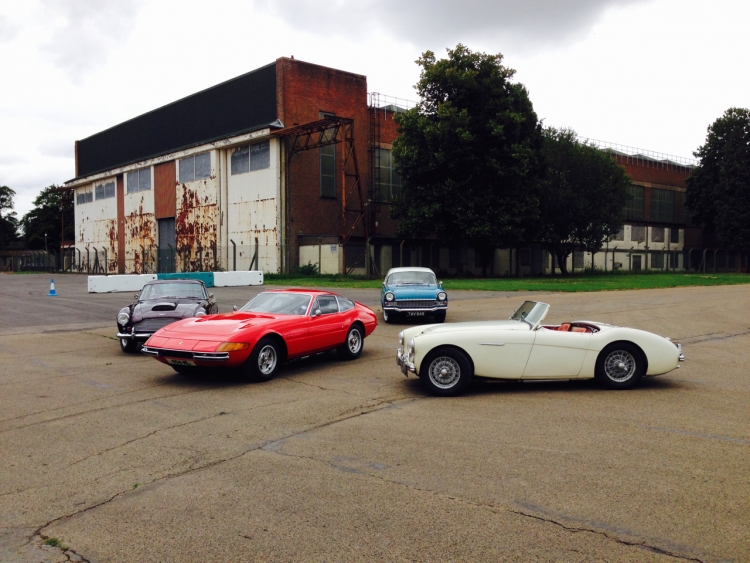 A couple of weeks later it was an early start for the very short journey to the Shere Hill Climb. Now in its third year, this is a charity event where Staples Lane near Guildford is closed off for a non-competitive cavalcade of cars up the hill. Although the road is closed, the 60 mph speed limit is still enforced and a couple of hay bale chicanes are put in to keep the speeds down. To be honest, the Daytona isn't suited to the route - the road is very bumpy and I was concerned about catching the low-slung exhausts on one of the many potholes. The tight chicanes also had my limited slip differential groaning a little as I made my way through, and I don’t think I ever got close to challenging the 60mph limit.

Each car has three runs in the day and below is a video of my first run. I had intended to film all three runs with the camera in different place on the car for each run, but unfortunately the Go-Pro decided the memory card was full after the first run (although subsequently I discovered it wasn’t) so I only got to film the first run, the results of which you can see below. The voices are my friend Richard Jarvis, who was getting his first experience of a ride in the Daytona, and myself.

The Daytona’s summer hasn't been entirely trouble-free, though. On more than one occasion whilst sitting in traffic and the car being hot, the brake pedal has gone rather disconcertingly long, but once free of traffic and moving normally the brake pedal returned to normal.  Vince diagnosed an issue with the brake master cylinder and not wanting to take chances with the most important safety item, this has been replaced with a new unit.

I've not had to change a tyre on the Daytona before and I can now say that the physical effort to do so will save a trip to the gym for a long while. Unlike modern wheels, the Daytona’s are secured by a single knock-on wheel nut. Originally the nut would by released by tapping the arms on the nut with a mallet, but fortunately you can now use a special attachment to a long arm wrench which saves the damage to the nut from the mallet. It still takes a lot of effort to turn the wrench to free the nut, and the wheels and tyres on the car are very, very heavy. With the nut off, I discovered that you have to jack the Daytona a long way up to get enough clearance to lift the damaged tyre off and put the new wheel on. All told, it took about an hour (and several pints of sweat) to change the wheel. Inspection of the damaged tyre revealed a nail in the shoulder of the tyre, presumably picked up at either Shere or on the run down to Goodwood for the Revival. I’ve ordered new tyres to replace the damaged one and replace the spare, which was rather old as well. It was a little disappointing to have to replace a tyre that was only a few thousand miles old but the position of the nail meant it wasn't repairable and I’m not sure I'd want a repaired tyre on the Daytona anyway.

In a few weeks time the Daytona will once again be heading down to the Champagne region for the Journées d’Automne and I shall report on how that went before the end of the year. In the meantime, here's a gallery of some of the events that the car has visited this summer.

Ferrari 365 meets Porsche 356 during the May Classics and Cake
With the Spyder for a family run out
For the people that say Daytonas drive like buses...
In eclectic company during the July Classic and Cake
With a rather more modern Ferrari 458 at Brooklands supercar day
At August Classics and Cake the Daytona went tail to tail with a Citroën SM
Awaiting its closeup during the CCW photoshoot at Bicester Heritage
In the forward parking at the Goodwood Revival