Porsche 928s are becoming rare and good condition manual ones even rarer. Matthew Lange tells the story of his fruitless search for the perfect example.

Have you ever had a car that you really want to own, you have the means to do so but somehow  you've never managed to actually acquire one? For me, that car is the Porsche 928, with a manual gearbox.

Why the 928? It's not the most desirable old Porsche, and there are other cars around that offer much the same thrills (and are easier to find!) The answer is easy and is perhaps a little predictable. Many of my formative years were spent sitting in the back of 928s, as my Dad owned four of them – 2 early 928s and 2 S2s, all of them automatics. He used them as his daily drivers and would usually keep each one for about 2 years and 50,000 miles before trading the current one in for another one. Dad loved them for their performance while still being comfortable cruisers, and he only stopped buying them because he didn’t care for the aerofoil wing on the later S4 cars. Being a 7-year old, I loved the space-age look and feel of the 928, especially when my other car experiences were limited to the then 10-year old Ferrari Daytona and my Mum’s MGB GT.  Even when I look at one today it looks more like a car that was designed in the early Nineties rather than the mid-Seventies. If I were looking for one to use as much as my Dad did then it would have to be an automatic, but as a car to use at the weekend the choice has to be a manual.

I've looked quite seriously for one of these rare beasts on more than one occasion, most notably in 2008. Back then I had an Audi TT as my daily driver but was clocking up the miles quicker than I had planned and the fuel bills were taking a toll on my credit card. It occurred to me for the value of the TT I could buy a diesel Golf or similar as a daily commuter car and still have some spare cash for a 928 as a weekend car that was more suited to the changeable British weather than the Daytona.

Being the sensible car-buying chap that I am, I obviously looked for the fun car first rather than the commuter car (which eventually became an Alfa Romeo Mito, but that’s another story). At the time, 928 values had reached their nadir. A combination of the infamous Top Gear Cheap Porsches challenge and a (somewhat deserved) reputation for being very expensive to maintain meant only the final 928GTS cars had five-figure asking prices, and S4s and GTs could be found for much less.

This is probably a good moment to recap the different versions of the 928 and explain the choices available to me. Production of the Porsche 928 ran from 1978 to 1995 and just over 61,000 units were produced, which incidentally makes the 928 a rarer car than the Jaguar E-Type. The basic 928 was launched in 1978 and was a departure for Porsche, being a front-engined GT car rather than a rear-engined sports car like the evergreen 911. Power came from a water-cooled 4.5-litre V8 in a fairly mild state of tune, producing 240bhp and 260 lb ft of torque. This new engine was clearly capable of producing a lot more power but in 1978 the world was in the midst of an oil crisis and fuel economy was a serious consideration for Porsche. It was still competitive with Porsche’s own 911 SC and Ferrari’s 308, with a top speed of 140mph and 0-60 taking a little over 7 seconds. The car was available with a 5-speed dogleg manual gearbox or a 3-speed automatic. Throughout the 928’s life the automatic gearbox was by far the most popular option.

The 928 gained a considerable performance increase in 1980 when the 928 S was launched. The engine was enlarged to 4.7 litres and given a much more aggressive tune, boosting power to a quoted 300bhp. Top speed was now over 150mph and 0-60 dropped to 6 seconds. The 928 S was distinguished visually from the lesser 928 by a front air dam, rear spoiler and larger alloys wheels of a different design. Both models ran side by side through to 1982 when the base car was dropped and the 928 S became the 928 S2 in the UK although other markets retained the 928S moniker. Power was up slightly to 310bhp thanks to revised Bosch electronic fuel injection, and automatic versions gained an extra ratio courtesy of a new gearbox provided by Mercedes Benz. 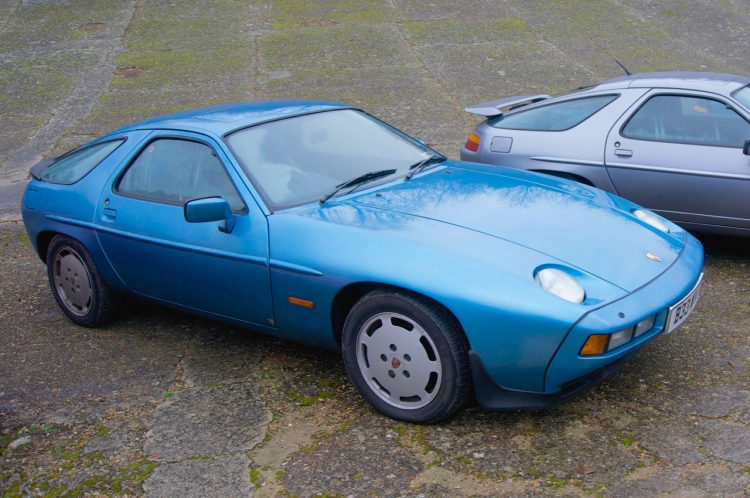 In 1985 the US received a unique version of the car now commonly referred to as the S3, where the 4.7 V8 was replaced by a 5-litre DOHC V8 rated at 288bhp (US S2s were rated at 230bhp due to emission restrictions). This engine in uprated form was made standard across the world in 1987 when the 928 S4 was launched. This new version marked the first significant changes to the body with new front and rear styling and the rear spoiler replaced by an aerofoil. Power was up to 320bhp (300bhp in the US) and the revised styling was considerably more aerodynamic, boosting top speed to over 170mph with 0-60 now less than 6 seconds. 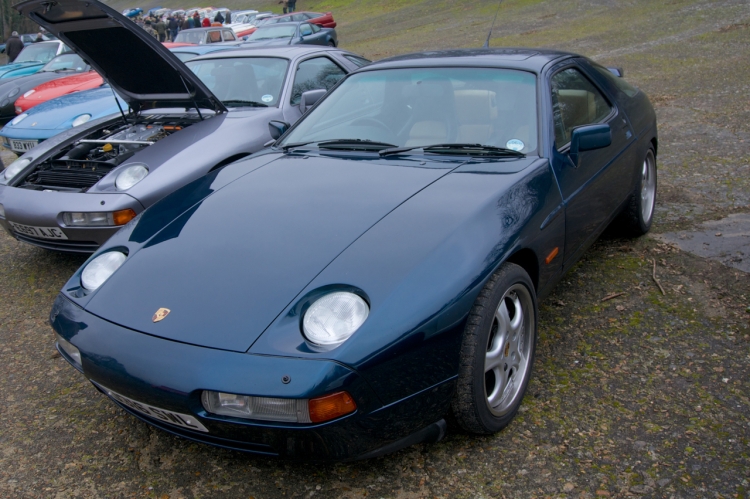 The S4 would remain as the base model through to the 1992 model year, but it was joined by a couple of other derivatives starting with the rare Club Sport (CS) launched in 1988. The CS was a manual-only lightweight model, weighing 100kg less than a standard S4. The CS featured revised pistons, cams and ECU mapping although no power increase was officially claimed. In the UK the importer did not think the stripped-out CS would appeal to the UK market and instead offered the SE which was a CS with some of the creature comforts put back in.

The CS and SE were effectively replaced by the GT in 1989. Again, this was a manual-only model but Porsche now rated it at 330bhp. At this point manual versions of the S4 were dropped. The auto S4 and the GT continued through to 1992 when both were replaced by the final version of the 928, the GTS. The GTS came with a 5.4-litre version of the V8 with power up to 345bhp, and was distinguished from the earlier cars by its flared rear wheelarches and Cup wheels, which were becoming increasingly standard across the Porsche range.

With the history lesson over, we return to my search story. My preference was for a manual S4, GT or SE, if I could find one. Initial searches showed that most 928s seem to be victims of deferred maintenance, something that the shiny corrosion-resistant bodywork would mask. The worst offender was a GT which managed to lunch its gearbox 100 yards into the test drive - fortunately the owner was driving and not me!

The best example I saw, and the one that I now regret not buying, was a manual S4 which was owned by a 928 enthusiast. The car had quite a lot of care lavished upon it, including a set of Cup wheels from a GTS with the correct 928 offset (many 928s now wear 911 wheels but these have a different offset). Crucially for me, however, it had big gaps in its early service history which I thought would be an issue when I came to sell the car on. Worse still, it was white which I really didn't like, even though I'd told myself I was going to buy on condition, not colour!

The owner did let me have a test drive in the car, and it lived up to virtually everything I expected from a 928. In many ways it felt similar to the 944 S2 that I ran for many years, with a similar driving position apart from an offset clutch pedal which had quite a gap between it and the brake pedal. The 944's four-cylinder engine could certainly never match the V8 rumble from the 928, nor the power it could produce. The dogleg gearbox probably put many buyers off the manual 928 but since my Daytona also used this unconventional layout it was very familar for me. The biggest surprise was that, despite its reputation as a soft GT car in a similar vein to the Jaguar XJS, the manual 928 actually felt very much like a sports car. While the 911 may have been Porsche’s main sporting focus, the 928 is more than capable of matching the lap times of 911s from the same era.

The owner also inadvertently made a mistake in trying to sell me his car by taking me out for a drive in his other 928, a very early 4.5-litre manual car. I was expecting this to seem rather mild next to the S4 as the engine was giving away some 80bhp to the newer model, but if anything it felt sportier than the more powerful S4. The SOHC engine also seemed more flexible than the larger DOHC unit, comfortably pulling out of roundabouts in higher gears.

This resulted in me changing my search parameters; I was now looking for an earlier S2 car, which would be the best compromise between the early and later cars. It's also the best-looking of the 928 range in my view, with more aggression than the early 928 but less bloated than the S4 and GT which only look really right with larger wheels than the standard items. Additionally, the SOHC engine is slightly less complex in maintenance terms, which is a major plus.

The downside to my revised search criteria was that the earlier cars are even rarer than the later ones in manual form and I could only find one for sale which needed a lot of work on it. At this point I became rather disheartened and gave up the search for a 928, save for the occasional glance at the classifieds to see if there was anything of interest.

Now, however, even the latest 928s are twenty years old and it seems the market now regards them as classics. As with virtually all classics at the moment, prices of 928s are now on the up, with some dealers asking nearly £60,000 for low mileage 928 GT cars. This has resulted in some lovely examples coming to market, and as I write this there are a couple of nice-sounding early manual cars available in the region of £20,000. I have to say, I’m a little tempted and the man maths part of my brain says it would still make the perfect fun car for those times when the weather's too poor to use the Daytona. However, the more risk-averse side of me is struggling to reconcile the thought of paying that sort of money for a car that would have commanded less than half of the current asking price a few years ago.

I doubt a 928 will be a blue chip investment like an early 911, but they are getting increasingly rare. The How Many Left website indicates there are 871 928s, of all types, still registered in the UK, with maybe 25% of those being manual cars. With such a small pool of cars to choose from, finding the right one is likely to be trickier than ever. With that in mind, much though I'd love a 928 in my garage, I don’t expect to have one any time soon.

All photos by author except for interior shot by the car spy.