The lease will soon be up on my company BMW and as a result I’m going through the process of choosing a replacement. Longer term readers will recall that I've really bonded with the BMW 120d M Sport that I've been running since the tail end of 2013. Naturally the logical choice to replace it would be the equivalent BMW 2 Series, but a change in policy at work now means that all company cars must come with at least four doors. The five-door version of the 1 Series is the obvious choice but before committing to one of these I wanted to see what the other options were.

Our fleet runs a surprisingly small list of manufacturers with only BMW, Mercedes, Citroën and now its new premium offshoot, DS, on the list. I considered a Mercedes C220d but I think these are rather bland, even if they make excellent financial sense. The most intriguing car on the list for me is the DS5. Ever since it was launched in Citroën guise I’ve been taken by the unusual looks of the flagship of the DS range, the DS5. With the BMW being familiar to me and having never even sat in a DS5 I arranged an extended 4-day test drive of a DS5 to see what it was like.

The DS5 was first launched in 2011 as part of Citroën’s new premium sub-brand DS, which is named after the legendary DS model that ran from the 50s to the 70s. Of the three-model DS range, the DS5 most recalls that iconic model, although the design is actually based on the C Sport Lounge concept of 2005.

This year the DS range has been spun off to create a brand in its own right with a face-lifted DS5 being the first car in this revised range. This separation of the brand has only just happened and the UK launch was scheduled for the Goodwood Festival of Speed, a couple of days after the my test drive was booked. All of the paperwork in advance of the test indicated the test car was still a Citroën-branded model, so I was pleasantly surprised to discover the DS I received was one of the newly revised cars. The delivery driver indicated I was probably the first member of the general public to receive one from the fleet demonstration team! 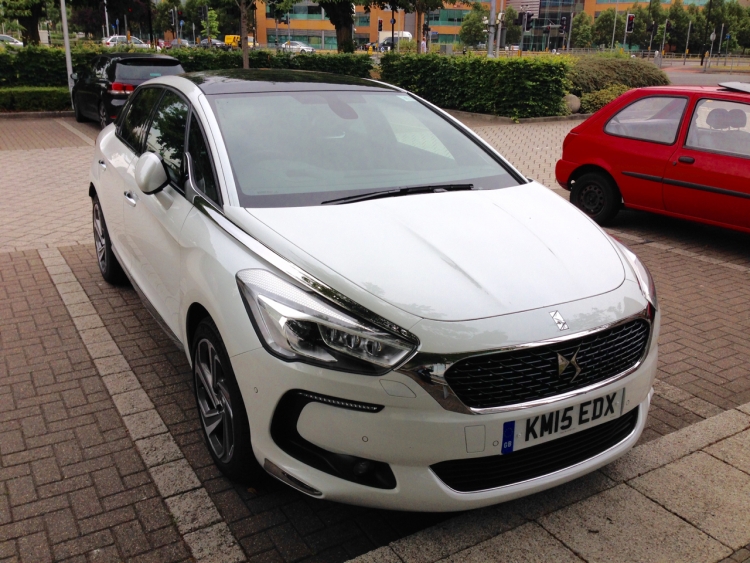 The car itself was in the exact spec that was looking for, a Prestige version with a 150bhp 2.0 turbodiesel engine. I could go for the 204bhp hybrid version but the additional cost of this would mean the car would work out considerably more expensive for me than either a Mercedes C Class or the BMW.

With a list price of £29,560, the DS5 Prestige is priced right into the middle of the executive car market, an area where non-German machinery has struggled in the last few years. The French contender comes well armed for the fight with a list of standard equipment that the German rivals can only dream about. Leather seats and climate control maybe commonplace but, heated massaging seats, a heads-up display, panoramic glass roof, reversing cameras, lane departure warning systems, and touchscreen satellite navigation are also included as standard.  However, what really makes the DS5 stand out in the office car park is the styling.

Cars are often categorised by their shape but the DS5 doesn’t fit very well into existing categories, blending together styling elements of hatchbacks, estate cars, MPVs and even 4 door coupés to make a car that really stands out. The visuals are aided by the chromed blades that run down the side of the bonnet into the A pillars. I love the way it looks (although my work colleagues and my wife were less keen) but I’m not convinced by the new revised grille that marks out the new standalone DS range. It looks less distinctive than the outgoing one which incorporated the Citroën chevrons, and unfortunately rather reminds me of the grille on recent Kias. 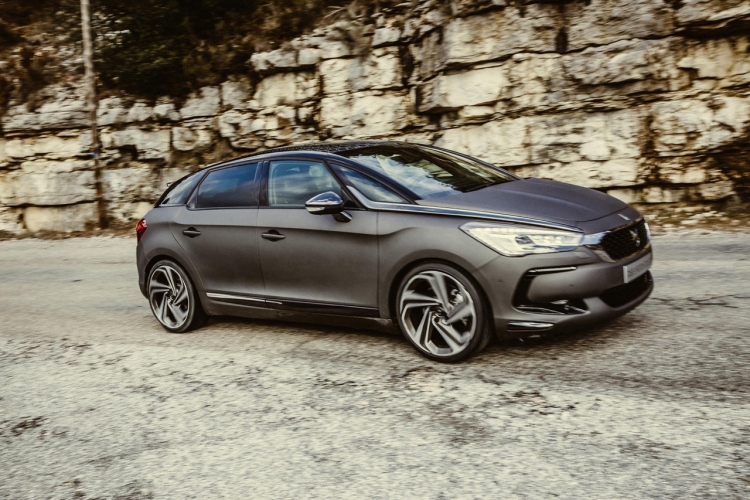 Inside the car is fairly unique as well. The seating position is quite high with the front seats divided by a tall centre console that contains many of the ancillary switches. There are further switches in a roof console to control the opening roof panels and raise and lower the heads-up display.  The weakest part of the dashboard is the analogue clock, which looks cheap and out of place in the otherwise very modern interior. 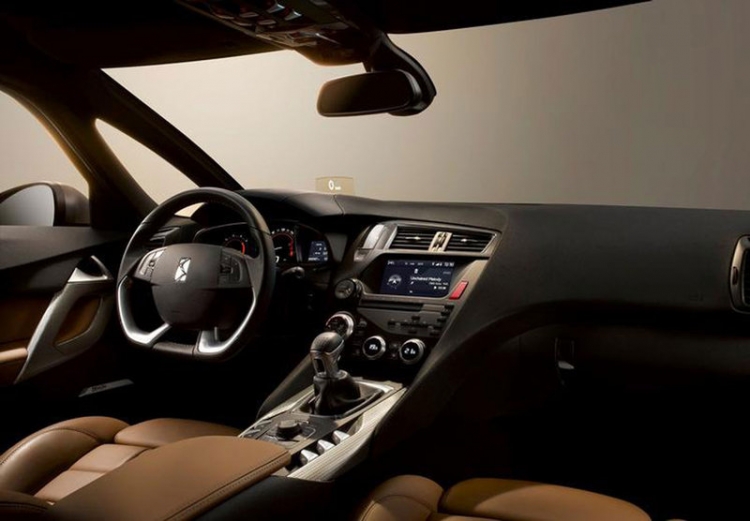 Part of my time with the DS5 included a night away for work, and the boot easily swallowed my luggage and that of a couple of work colleagues. I didn’t test the space in the back seats although my wife said it lacked a little in rear headroom, partly because of the space needed for the panoramic roof panels.

On the road the DS5 was impressively refined. Noise from the diesel engine was muted and there was very little wind noise either. Visibility out of the large windscreen is impressive, though the roof spoiler limits rearward visibility. The six speed manual 'box had a very nice shift, although the lever itself was a little thick for my liking. The DS5 was deceptively quick too, and I found myself checking the speedometer frequently to ensure I wasn’t travelling 5-10mph faster than I thought I was.  Part of the deception probably comes from the high seating position, which is a little odd in a car that doesn't look that tall from the outside. The high centre console adds to this illusion - DS say it was inspired by an airliner cockpit and I can see what they mean. While sitting in traffic I looked over at a Range Rover Sport alongside me and was surprised to see that I was sitting at almost the same height as the SUV driver.

With my present daily driver being a rear wheel drive BMW with sports suspension I wasn't expecting much in the handling department from the DS5, but it proved to be competent if not especially exciting on my local back roads. The squared-off bottom of the steering wheel can be annoying when applying a lot of lock, and it also feels a rather big car on tight B roads, again due to the high driving position.

The ride is impressive. Early DS5s were criticised by the UK press for their poor ride quality, but the revised versions now have new dampers and a slightly increased ride height. The result is a very smooth ride with the many imperfections of UK roads easily absorbed.

Overall, the DS5 proved to be a very competent and likeable car, but I had one serious reservation surrounding the rebranding. All of my work colleagues - none of whom are petrolheads - were asking what it was. When I responded "It’s a DS" I was always greeted with a look of incomprehension to the point that I gave up and just started calling it a Citroën.  I’m not a brand snob and usually take cars on their merits, but having to constantly explain to people what the car was became a little tiresome.

If I really loved the car this wouldn't put me off, but though the DS5 is a very good car it's just not suited to my needs. The big DS5 would be great if I had to spend a huge amount of my work time in the car and travelled 40,000 motorway miles a year, where the ride comfort and equipment levels would be appreciated.  However I usually do around 15,000 – 20,000 miles a year on a mix of motorways and back roads, and for this sort of usage the DS5 just doesn't provide enough driving excitement. I don’t really need the extra space that the DS5 provides over the BMW 1 Series, which is a far more involving car to drive.

I really liked the DS and I wanted to love it, but in the end I opted to keep the status quo: I ordered a BMW.

White DS5 by Matthew Lange; all other photos by DS.