Daytona in a picturesque French village

Between an unexpected and exciting offer and a new closely-related garage mate, it's been a busy month for the Daytona.

The drudgery of my usual working day was coming to its end when my iPhone bleeped to indicate I had an email. Much to my surprise it was from Mark Dixon, deputy editor of Octane magazine, who was looking for a Daytona for a forthcoming road trip feature. This wasn't the first time I've had requests to use the Daytona for various media, but usually the logistics haven't worked out as the requests came at too short notice, or in the case of a request to use the car in one of a certain curly-haired TV presenter's DVDs, it was something I wouldn't want the car associated with.

This request was different, however. Octane is my favourite motoring publication of the moment, mainly because it concentrates on older collectors cars but also because I appreciate the high production values put into it. I've also been looking to do a more extended road trip with the car, so the request came at the right time for both parties. After a series of phone calls and emails, a plan was put together for a drive story to France with me, the Daytona, Octane's features editor Keith Adams and photographer Paul Harmer. For my next update on the car I'll write about what was probably the most intense but fun experience I have had with the Daytona since I've owned it, but for now I'll just urge you to buy the next edition of Octane which is, I believe, in the shops (in the UK) on the 22nd of August.

So what else has been happening in the Daytona's world? Well, the biggest news is that my Daytona now shares garage space with another Daytona, as my Dad acquired a Daytona Spyder conversion at the Bonhams' Goodwood Festival of Speed auction. Purely by coincidence the chassis number on this car, 16735, means that it was built not long before my own 16763. At the time Ferrari used odd numbers for its road car chassis and even numbers for its racecars. First delivered in August 1973, the car was converted into Spyder configuration in the late seventies by Autokraft in the UK. It has also been more recently restored by DK Engineering. Dad has looked at many Daytona Spyders over the years, both conversions and factory cars, but what attracted him to this car was that, although it was a conversion, it has received the same structural strengthening that the factory cars received when new, including thicker A pillars, a steel rear bulkhead (it's fibreglass on the berlinettas) and steel wheel arch liners. Despite being left unused in a private car collection for a number of years, the car is mechanically in very good condition, and Dad has already used the car on a 350-mile road trip. He does plan to fit power steering (probably an electric unit, unlike the hydraulic unit from a Ferrari 400 that's fitted to mine), to alleviate the notoriously heavy steering. I'm looking forward to driving the car and seeing how the Spyder version feels different to my Berlinetta.

The new arrival has meant space is at a premium in the garage, and as a result the Ferrari California has left the nest for the last time. Meanwhile, as I was giving the Daytona a well-deserved clean yesterday, Richard Tipper of Perfection Detailing was working his mastery on the red Ferrari 365GTC4. Regular Drive Cult readers will be familiar with the master detailer's work, but I think this photograph will serve as a reminder. 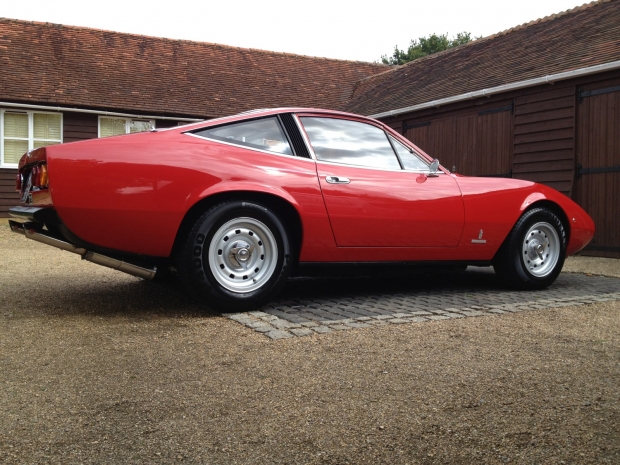 Richard's previous work on the Daytona made cleaning it remarkably easy, with the grime and flies from the Octane trip coming off very easily. 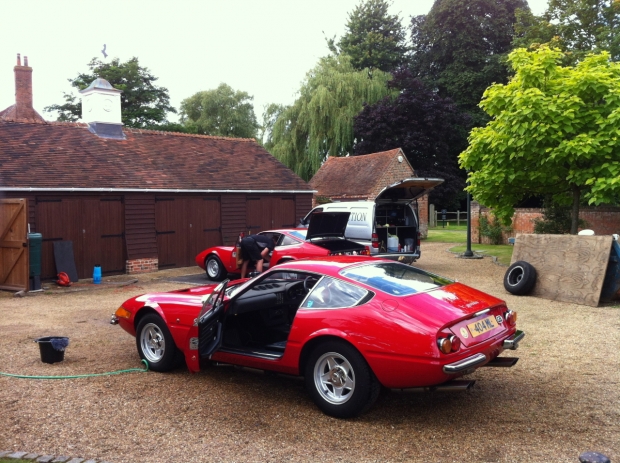 The next public engagement for the Daytona will be at the Windsor Concours D'Elegance where the car will form part of the display on the Long Drive leading up to the Castle. I hope to try and use the Daytona a little more between now and then.