The big Seventies coupé known as the Rolls Royce Camargue has the pedigree to be a cool car, but it's not. Here's why it's considerably less than the sum of its parts.

A perennial favourite of car magazines and websites is the cool car list. It’s a good way of filling column inches on quieter months and promotes debate amongst readers on forums. I would be lying if I said I hadn’t considered doing one for Drive Cult, but the trouble is it would only end up being a list of my favourite cars and not necessarily ones that other readers would find... er... cool.

Instead, I’ve recently been thinking about what is the least cool car. By that I don’t mean the sort of 'white goods' cars like the Toyota Corolla or Ford Mondeo, that are functional but don’t set out to be stylish or fashionable. What I'm looking for is a car that should have all the ingredients to be cool, but just isn’t.  After some consideration, I reckon the car that most fits this bill is the Rolls Royce Camargue.

Italian-styled, British-engineered grand tourers often score near the top of cool lists: think Aston Martin DB5 or Jensen Interceptor, and the Camargue could so very easily have joined them. However, the line between cool and uncool is often fine, and the Camargue definitely falls on the wrong side of it.

The Camargue was first conceived in the late Sixties as a potential replacement for the two door version of the Silver Shadow, the Corniche, and the first reason it should be cool is that for this car Rolls Royce elected to contract out the design work to the dons of Italian car design, Pininfarina.

Pininfarina has a great track record for producing cool cars, from the Ferrari 250SWB to the Alfa Romeo Duetto, so tasking their designer Paolo Martin with creating the new RR coupe could have produced a design classic. Martin was responsible for the styling of two great looking GTs of the period, the Fiat 130 and Ferrari 400 family of GTs, and it is clear he used a very similar design concept to the Camargue.

However, while the two Italian cars are both elegantly proportioned with their low belt lines, the need to incorporate the large Rolls Royce grille and make space for the Rolls Royce V8 resulted in the Camargue looking bloated and slab sided. This also emphasised that the wheels look rather too small for the car. All this may not entirely be Martin’s fault though, since there are some design drawings floating round the internet which show the car was originally intended to have a much smaller front (interestingly the drawings show Bentley badging), so is it possible than something got lost in translation between design and engineering? Whatever might have been, the resulting car is certainly less stylish that the Corniche it was originally intended to replace.

Not long after the design work was completed, Rolls Royce hit financial trouble due to problems in the aircraft engine division and the receivers were called in, which led to the new coupe being delayed. Eventually, the newly separate Rolls Royce Motors was able to launch the Camargue in 1975, not as a replacement for the Corniche but as a halo model sitting above the Corniche in the range.

At a list price of £29,950 the new car became the most expensive new car you could buy, costing almost twice as much as the four door Silver Shadow and 50% more than the Corniche. Save for the unique styling it was hard to see what you got extra over the Camargue’s cheaper siblings.

Mechanically it was almost identical to the other cars using the same 6.75 litre pushrod V8, although after 65 cars had been made the Camargue was upgraded to Solex carburettors from the original SU’s to liberate a little more power. The extra power probably did little more than compensate for the fact that the Camargue was also heavier than the Corniche. Other than the styling the only USP over the Corniche was its split level air conditioning system - the first such system fitted in a car.

The new Coupe had few rivals in the market place, with its closest competitor being the Corniche! Buyers may also have considered a Ferrari 400 or Aston V8, but these were both cheaper and sportier cars. Conceptually the American personal luxury land yachts such as the Cadillac Eldorado were quite similar, but these were sold at a much lower price and quality point.

The Camargue continued in production through to 1985 receiving the same upgrades as the rest of the Rolls Royce range did. It was never a big seller with 531 produced by the time production ended. The majority of sales went to the United States and to the oil-rich Middle East. As both of these regions are hot beds of car customisation it's not surprising that quite a number of Camargues got modified in ways that many might not find exactly tasteful. 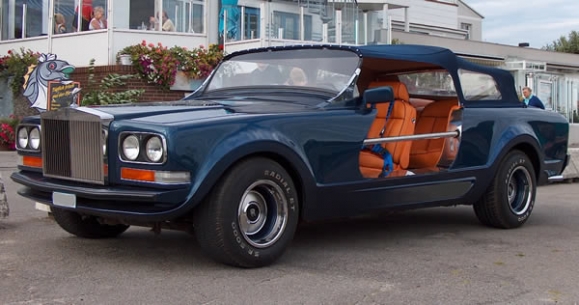 Near the end of production, one Camargue was delivered as a Bentley with a revised softer Bentley style grille. It’s still no looker but a big improvement on the Rolls Royce version. In fact, when it comes to coolness the owner of this car probably chose the better brand. While today’s Bentley’s are the cars of choice for Premier League Footballers and bankers, the badge-engineered Bentleys of the 70s and 80s were more the connoisseur’s choice, while Rolls Royces were preferred by television light entertainment presenters who treated golfing clothes as casual wear.

It seems that Rolls Royce did give serious consideration to a full Bentley version of the Camargue featuring the turbocharged version of the venerable V8 that would ultimately find a home in the Bentley Mulsanne Turbo and later Turbo R. With some extra grunt and possibly larger wheels to accommodate the bigger brakes the extra performance would require, the Camargue could have become the car it should have been.

The Camargue was not directly replaced and it would not be for another twenty years that a two door Rolls Royce coupe in the form of the Phantom FHC would appear. In the Nineties the Bentley Continental R was introduced and could also be considered as an indirect replacement. This mighty GT showed that it was possible to produce a very cool car from very similar ingredients.

In the end the Camargue was a very expensive niche product that offered very little to the buyer over what was already available. Today Camargues sell for between £30-£50,000, which is about the same as how much a Corniche FHC or Bentley Continental R will set you back.