Daytona and Enzo at Clandon Park

The Daytona gets out and about despite the recent bad weather.

Forgive me if this latest update about the Daytona starts with yet another whinge about the weather, but once again use of the old machine has been rather restricted by the seemingly constant rain the UK has suffered from this spring. This meant cancelling the trip down to the Goodwood Supercar Sunday at the beginning of May, among other planned journeys out.

The weather also tried its best to disrupt the highlight of the last few couple of months for the Daytona and I - the photo-shoot for the latest edition of Evo Magazine. No sooner had I got the car out of the garage to be placed in front of photographer Gus Gregory's Nikon than the heavens opened. At first it was lightly spitting which was fine since I was happy for the car to get slightly wet, but then it started to hail which was too much for me and I put the Daytona back under cover. Ten minutes later and the sun was back out, and you can see the results in issue 171 of Evo.

A couple of issues earlier Evo compared another Daytona to its immediate predecessor, the 275GTB, and the modern front-engined GT Ferraris. I was very honoured to be asked to contribute some sidebar pieces explaining the different Ferrari V12 engines to this piece. The writer of the main article, Jethro Bovingdon, didn't really get on with the Daytona finding the steering exceptionally heavy and the car unwieldly on the tight alpine course at the Milbrook Proving Ground. He commented that the Daytona would be far better suited to sweeping French N roads, a comment I whole heartedly agree with. Of course the power steering fitted to my Daytona means it doesn't suffer from anything like the steering heaviness of a standard car, and is certainly a worthwhile modification for modern driving. Interestingly, a comment on Ferrarichat just after (but unrelated to) the article came out indicated that many Daytonas today would benefit from the steering box being refurbished which helps with the steering weight immensely.

The next time a break in the weather coincided with an opportunity to take the car out, it seemed every other classic car owner in the area had the same idea. I can't remember another casual drive when I spotted a gorgeous Mercedes 300SL roadster, a Porsche 356, and a classic early 911 (which looked rather like Chris Harris' old Kermit) seemingly just out and about. A rather more modern super car to catch my attention was a shocking green Lamborghini Aventador, although I'm not quite sure why the owner felt the need to prove that his brand new 700bhp car was faster than my 38 year old 352bhp one. The trip out was rather impromptu so I wasn't really sure where to head for. In the end I opted to check out the new Hindhead tunnel, which has recently opened to allow the A3 to bypass the town of Hindhead. At 1.14 miles long it is the longest non-estuary tunnel in the UK, and passes under the Devils Punchbowl, an area of natural beauty and incidentally where the opening sequence of the film Gladiator was shot.

Tunnels have always appealed to petrolheads for the echoes that can be generated from tuneful engines and exhausts, and this tunnel is obviously no exception. The authorities are obviously aware that there could be cars and motor bikes blatting through the tunnel at high speed and have introduced average speed cameras at each end of the tunnel. Since the Daytona is capable of breaking the national speed limit in four of its five forward gears, for the run through the tunnel I dropped the car down into fourth and headed through at a steady indicated 70mph (though considering the accuracy of the speedometer that could be anything from 55 - 80 mph). The roar from the V12 echoing off the tunnel walls was spine tingling, and while I did record it using my Kodak Playsport camera, the sound did not come out well enough to post here unfortunately.

From the tunnel I turned off the A3 into Hindhead and headed to the National Trust Cafe situated on what was the old A3, which is now being returned to nature, overlooking the Punchbowl. Driving through Hindhead itself was a little strange; while I'm sure no one in the town misses the traffic that used to regularly snarl up there, it felt something of a ghost town - rather like Radiator Springs in the Pixar movie Cars. There were hints that a couple of small businesses had gone under as a result of the redirection in traffic which is unfortunate.  Back home and still playing around with the camera, I made this short film below.

Last weekend, needing a break from the relentless Diamond Jubilee coverage here in the UK, my wife and I joined the Surrey section of the Ferrari Owners Club in a drive to Clandon Park, a stately home now owned and run by the National Trust. The cars made for a spectacular sight lined up in front of the house, and for a short while the Daytona was parked up next to the Enzo belonging to Autofficina's Chris Green. The Enzo looks spectacular and makes an impressive noise but the car that most impressed me was a Ferrari 365GT4 Berlinetta Boxer. I've discussed before about whether the Boxer is undervalued, and seeing this car complete with the early Boxers six peashooter exhaust pipes reminded me of my final statement in that piece that I would one day like to see one sharing garage space with the Daytona. 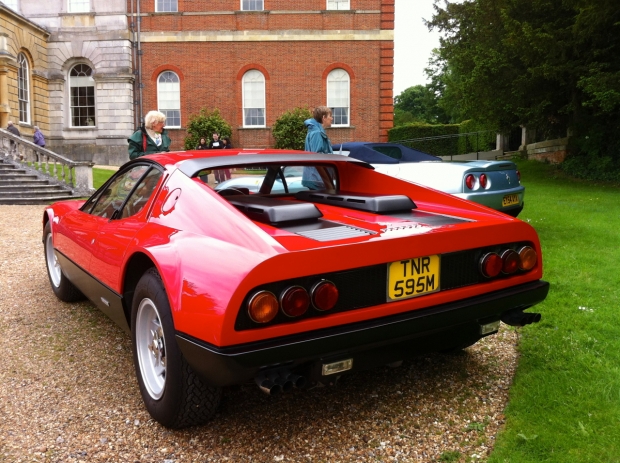 The trip to Clandon Park also gave me the opportunity to show of the a couple of additions to the Daytona in the form of Drive Cult stickers on the inside of the rear side windows. I could have gone for some of the large stickers that we have made up (and were carried by a 911GT3 in the Nurburgring 24 hours) but I felt that the smaller ones suited the car best. No doubt some pictures of the other Drive Cult garage cars modelling the different stickers will appear on the site in due course. 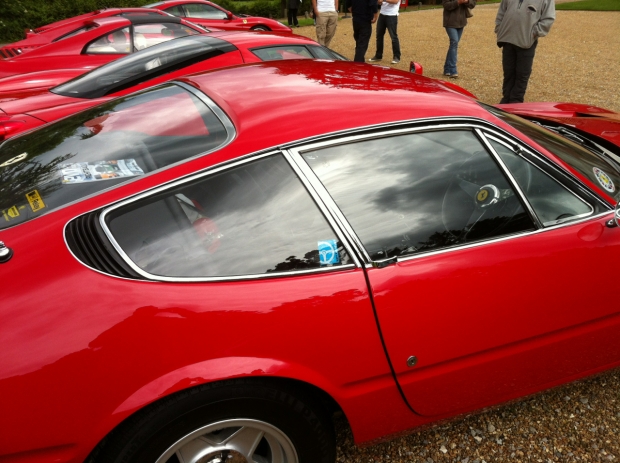 The next chance to show off the car (with stickers) will be at the Ferrari Owners Club GB's national concours at Broughton House neat Kettering on the 8th July. The club is attempting to get as many examples of the older models as possible present so it should make a great display. The event is open to the public but there is a charge for non-club members. I'm unsure of the exact amount but expect it to be in the region of £10-£15. If you're there please come and say hello.

At the National Trust Cafe Hindhead
Line up at Clandon Park