The Daytona with a Maserati Khamsin at Brooklands

The recent overhaul is finished off with some new rubber for the Daytona.

The relatively mild spring has seen the Daytona back on the road after its winter overhaul.  The first reasonable journey was the familiar route down to Goodwood for the 72nd Members Meeting. I hadn’t originally planned on taking the Daytona but the combination of mild weather and confirmation that the car parks were firm and free of mud encouraged me to get the car out for the event.

During that run and the other shorter journeys, I noticed that the tyres didn’t seem to be gripping the road that well. They were perfectly legal at the M.O.T. but a quick inspection showed that the date codes were somewhat older than I expected and they were more than overdue for renewal.

I wrote about the tyre options for the Daytona last year and I've decided to retain the standard 7.5” rears rather than upgrading to the 9” rears, at least for now. By retaining the 7.5” rear and sticking with the Daytona’s standard tyre size there are three options available: the Michelin XWX as originally fitted, the Vredestein Sprint classic and the Avon CR6ZZ.

Advice received since the previous blog indicated that the CR6ZZ is an excellent tyre especially if you want to drive hard, but it’s very sticky which can result in detritus from the road being thrown up onto the paintwork. That and their relatively short life means they are not ideally suited to the touring that I use the car for.

Vredestein is not normally a brand associated with high performance cars but their sprint classic tyre fills in a gap in the market for a modern tyre for classic sportscars which the mainstream manufacturers have largely ignored. Michelin still make short runs of the XWX but they're very expensive at nearly £350 a tyre (once VAT has been added).  My Dad has already fitted the Vredsteins to his Daytona Spyder and has had positive experiences with them so far. The fact that that Vredesteins were also just over £100 cheaper per tyre sealed the deal and I booked the car in to have them fitted at Vintage Tyres at the National Motor Museum at Beaulieu in Hampshire.

Vintage Tyres is about 60 miles from home and with an afternoon booking I took a fairly leisurely run down the A31 before picking up the M3. It took around 90 minutes to fit the tyres and I filled the time with a wander around the (slightly disappointing) motor museum. 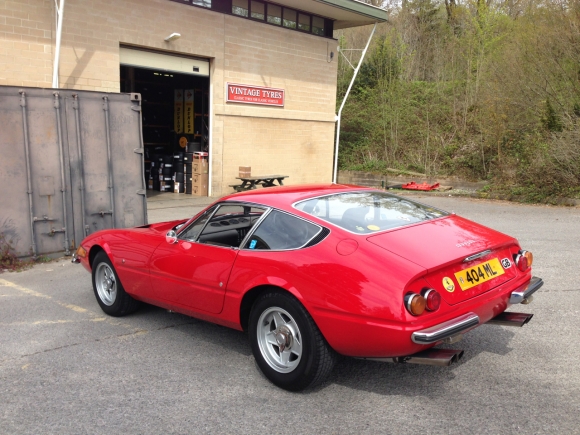 On the car, the Vredesteins are aesthetically more pleasing (see picture in gallery) than the previous Pirellis which had a rather square sidewall.  The new tyres were also weighted in a different place to the Pirellis and the fitter wisely has left the adhesive from the previous weights rather than chip the paint trying to remove this.

Back on the road, the Vredesteins seem to produce less road noise than the Pirellis and grip levels seem to be much improved. I have yet to try them in the wet, but hopefully they will go a long way to resolving the grip issues in greasy conditions that I noted on my previous French trips.

A couple of days later and the Daytona was out again for the short drive to Brooklands to meet up with some of my motoring friends for an informal ‘cars and coffee’ session. Among the other attendees was Richard Jarvis who brought along his Maserati Khamsin. Conceptually the Khamsin is quite similar to the Daytona as a big front engine 2 seat GT car, with the Khamsin sporting a 4.9 litre D.O.H.C. V8 producing around 330bhp. They were never really direct sales rivals though, as the Khamsin was introduced just as the Daytona was going out of production.  Parked side by side it was interesting to contrast the curves of the Daytona with the wedge shape of the Khamsin, penned by Marcello Gandini for Bertone. Hopefully in the future we will bring you a more detailed comparison of the two cars.

Last weekend was the annual Goodwood Supercar Sunday and once again the Daytona was granted grid parking. You can see some of my pictures from the event in our gallery. I dropped into Dad's on the way home and as he had his own Daytona Spyder out to play I took the opportunity to grab a couple of pictures.

As to more immediate plans, my Dad’s Iso Grifo is finally finished so I hope to bring you a drive story in the near future, which will inevitably include some comparisons with the Daytona! I also acquired a GoPro camera over the winter, so I plan to bring you some video footage of the Daytona out on the road during the summer months.