If the XL1 is the Volkswagen that studies and does it homework every night, then the XL Sport is its twin that gives you a wedgie and hangs you from the flagpole after taking your lunch money.

We’ve been waiting to see how Volkswagen’s acquisition of Ducati would materialize, and we’re pleased to say initial results are not at all disappointing. The Volkswagen XL Sport is essentially an XL1 with all the hybrid bits removed and replaced with the V-Twin engine from the limited production Ducati 1199 Superleggera.

Where the XL1 used its lightweight, supercar-like carbon fiber chassis and slippery shape to achieve maximum efficiency, the XL Sport will use these same attributes to extract the most performance possible from the 197 hp 1.2-liter Ducati engine. Volkswagen and Ducati claim it’s the most powerful two-cylinder engine in the world. 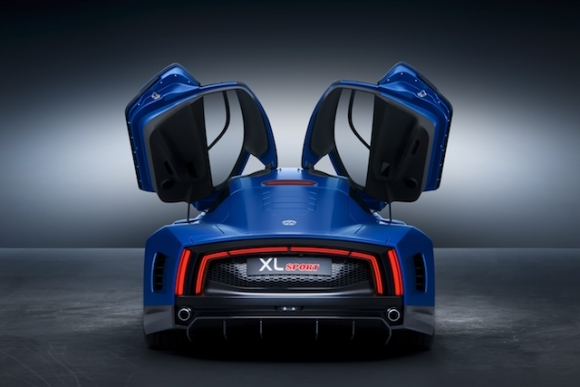 The XL Sport weighs just 1962 pounds, which means it should be an absolute demon on the track. With a 0-60 time of 5.7 seconds, it doesn’t have the straight-line speed of the current crop of supercars, but it should be plenty quick in the real world. Plus, hearing the high-strung V-twin rev all the way to 11,000 rpm right behind your head should be a religious experience. Gearshifts are handled by VW’s 7-speed DCT gearbox.

Thanks to some trick aerodynamics normally found exclusively on supercars, the XL Sport will hit a top speed of 168 mph. As a starting point the XL1 already has an extremely aerodynamic shape, so to augment this, the XL Sport gets special vanes at the front that direct air to specific channels, wheel arch vents, a flat underbody, air ducts in the hood, an adjustable rear spoiler, and adaptive air vents in the rear hatch, which optimize downforce during cornering.

The chassis has seen a significant performance overhaul as well. The front suspension features a new high strength steel subframe and pullrod actuated dampers, while the rear gets a prototype racer-style pushrod setup. Tires are 18-inches in diameter all-around, with 205 section tires in the front and 265s at the rear. Wheels are ultra-lightweight forged magnesium alloy, and brakes are ceramics all around.

It looks absolutely fantastic too. There’s no attempt to hide its origins, but the XL Sport is lower, wider, and just plain meaner looking than the comparatively staid XL1. The wind-sculpted profile is retained, but it’s also slightly longer to squeeze out a bit more downforce at top speed.

The interior is similar to the XL1, but with its lap timer and oil pressure gauge in the dash and red stitching throughout, it has a sportier feel to it. The aluminum accents add a sense of quality and the wooden shift knob is cool Easter egg.

We should learn more when the XL Sport is officially unveiled at the Paris Motor Show later this week, but it’s already looking like one of the most exciting Volkswagens of the last several years, if not ever. Unfortunately, it's just a concept at this point, but we've been told by a reliable source within Volkswagen that a limted production run is a possibility.

A lightweight track car with the distinctive, deep-chested thrum of a Ducati V-twin? Yes, the want is strong with this one.