Few get to see the inner workings of a Formula 1 factory, so when Chris Ratcliff was invited to visit Lotus Renault Grand Prix, he leapt at the opportunity.

I've often heard people say that Britain has no manufacturing any more, and that everything is now outsourced. While that may be true for some sectors, there's still one industry that British manufacturing is very much at the forefront of: Formula 1.

In a nondescript factory in the middle of nowhere is Lotus Renault Grand Prix. I was lucky enough to be given a tour of the facility, and it gives an incredible insight into the technology at the heart of modern F1.

The tour started in LRGP's new Computational Fluid Dynamics (CFD) centre. Laid into a hillside to make it more efficient for power and cooling, this building looks discreet on the outside but inside it's almost like a vintage Bond villain's lair, with large ellipitical spaces inside the bare concrete walls. A central area houses a show car in front of a large CFD animation showing off the team's product, flanked on one side by a bank of engineers tweaking and designing, while the other contained a large supercomputer – actually throttled back from full capacity thanks to F1's resource cap agreement. 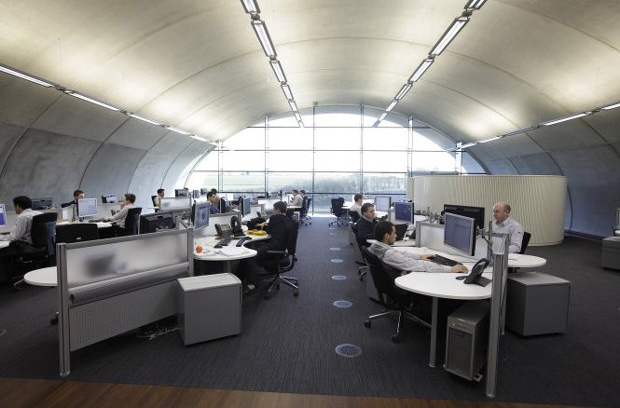 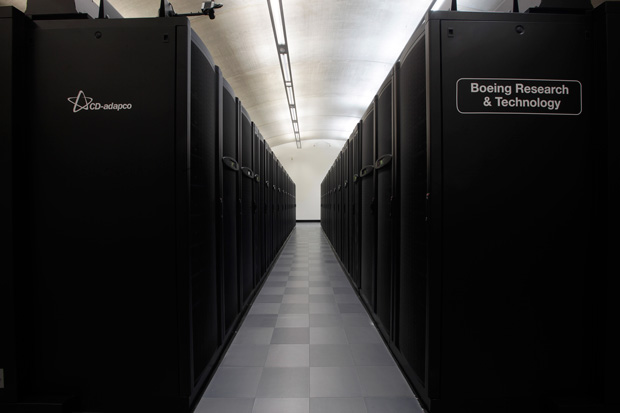 The team's wind tunnel is an impressive piece of heavy engineering, though the model under testing inside was strictly off-limits! Foiled in my attempt to catch a glimpse of the 2012 car, the next stop was a rapid prototyping workshop which featured mind-boggling micro-engineering.

For many years, wind tunnel models were constructed from carbon fibre and plastic. Each piece was crafted by hand, then models were assembled and then tested in the wind tunnel. These scale models worked well, but the labour-intensive process meant that making quick, iterative changes was impossible. In addition, the increasing intricacy of Formula 1 designs posed a significant problem to wind tunnel testing: how to mount sensors in the models to measure air flow without affecting the flow itself.

The solution came in moving away from handmade carbon fibre parts, and instead using a 3D printing process which involves either creating plastic parts from a UV-hardening gel using lasers, or metal parts from layers of metal powder fused together with, you guessed it, lasers. As a result, dozens of slightly different aero pieces can be created in a single run on the appropriate machine, and then can be quickly tested to see the effects of the variation across the car as a whole. This process also allows tiny passageways and cavities to be incorporated for sensors, which would be almost impossible to achieve any other way.

Despite the vast array of precision computer-guided machinery in evidence all around, the first thing I saw in the fabrication area was exhausts and radiators being built by hand on manually adjustable jigs. The quality of the work was absolutely astonishing, with perfectly smooth, even welding and astonishingly accurate manufacturing. At all points throughout the manufacturing process it's clear that technology is used where it gives the best performance, but takes a back seat for jobs where skilled human hands are better. 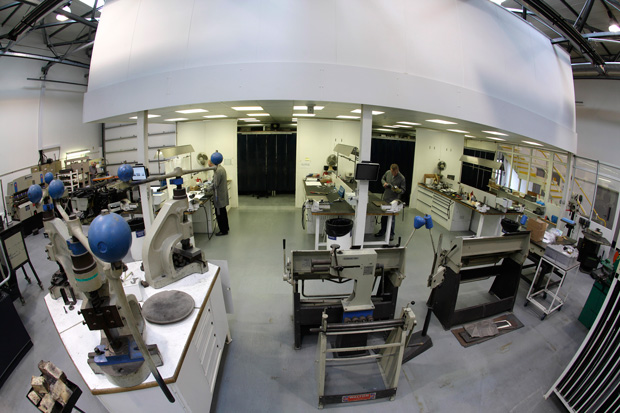 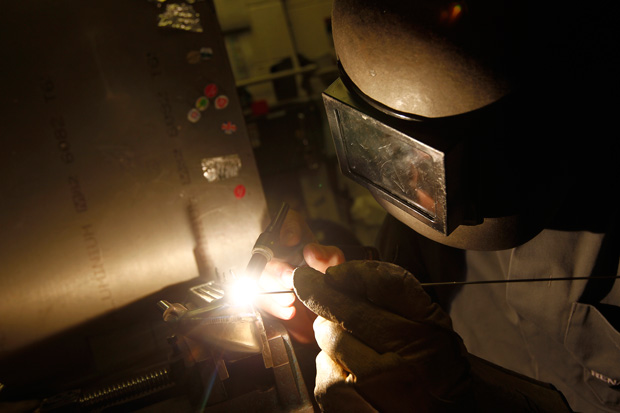 Peering into clean rooms for carbon fibre manufacture and seeing parts being wrapped and packed for curing the giant autoclaves, I'm astonished that so many aspects of the design and creation of an F1 car fit into such a comparatively small space, but also that so little of the work is outsourced. Dotted around every area are examples of the work being done. Two hydraulics manifolds for the gearbox were on display, one impressively machined but a few years old alongside a current version from the 2011 car. The new part was both more complex than its predecessor, but also smaller, lighter and more intricately machined. Just as the exterior of a Formula 1 car has become more sculpted and detailed, so too has each component underneath the bodywork. 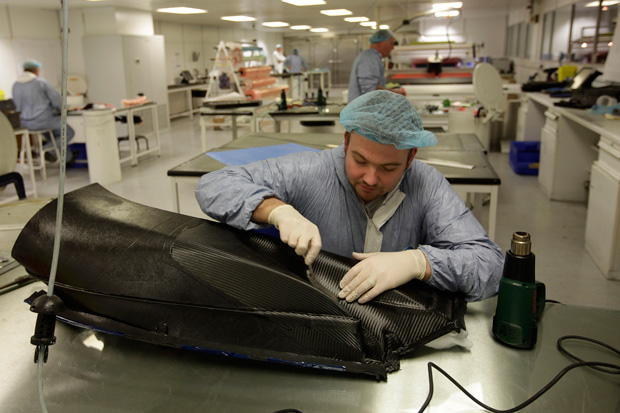 Speaking of the bodywork, I assumed that the bodywork and monocoque were made from pure carbon fibre these days. However, it turns out that I was wrong. They're actually constructed from a sandwich of carbon fibre layers either side of a core, as they have been since John Barnard first introduced carbon fibre chassis to F1 in 1980. In the case of the monocoque, the 'filling' in the sandwich is an aluminium honeycomb, which looks remarkably similar to a Cadburys Twirl made out of aluminium, and is very, very rigid. The secrets of how these parts are made, shaped and composed are closely guarded secrets, and it's mind-boggling to see the component parts and try to imagine how they fit together to become the tightly-formed racing cars you see on track.

F1 steering wheels are a microcosm of all that goes into a racing car, carefully fitted around the needs of the driver with no space wasted and no expense spared in pursuit of performance. I was handed a 2010 wheel with dozens of paddles, toggles, dials and rotary thumbwheels, and the first things that struck me were the lightness, but also how thin the rim of the wheel was. In a time when road car manufacturers equate thick steering wheels with sportiness, the pinnacle of the breed is quite the opposite. The switches and dials were as positive as you'd need to operate them at 200mph through thick gloves, and the 8 different paddles on the back of wheel covered far more than just the clutch and changing gear.

To hold an F1 helm in your hands is fascinating, and I kept finding new bits to admire or ask about. One small room in the factory has a steering wheel test bench where both engineers and drivers can develop and trial new advances. As well as an assembly mounted to a work bench and a set of pedals on the floor, the room houses three 7-foot tall racks of electronics; one to simulate the engine ECU, one for the chassis and one for the wheel controllers. All that equipment and effort to help improve a steering wheel...

OK, it's not an F1 car, but teams aren't keen to share that sort of information!

The final treat was a trip to the 7-post rig. If you've not seen one of these amazing bits of kit, they consist of a plate atop a hydraulic ram under each wheel, one ram mounted under the nose, and two mounted roughly where the gearbox sits. Between all seven, they can simulate the loads acting on the car (pitch, roll and downforce), and the loads coming up from the track, all based on data from previous running of the car. The engineers can then read the suspension data from the telemetry and refine any problem areas as though the car is running on the real track. I was lucky enough to watch as they ran the programme for a lap of Singapore, and the sheer violence of the forces acting through the car are shocking. The way the tyres deflect and the cockpit is shaken in 90 seconds makes you realise just how tough it must be to drive a car in such conditions, let alone race with 23 other cars for 2 hours. The cars take a real pounding over the virtual kerbs, and shimmy across the ripples and lumps of the everyday Singaporean roads. 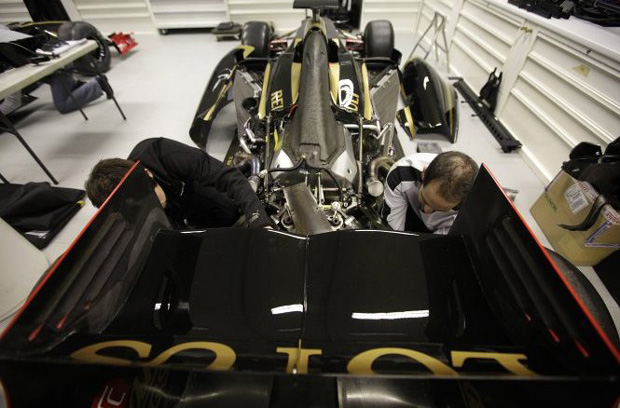 At the end of the tour, we stopped in a loading area next to a couple of show cars showing battle scars, a pile of flight cases and something that might have been a 2012 car in the early stages of assembly (though too early for me to recognise much of it!) There was also what looked like a test nose cone and wing with a much, much lower nose to suit the 2012 F1 regulations. However, despite all the priceless cars and parts all around, what caught my eye was was a sheet of A4 paper in front of one of the loading bays, gaffer-taped to a window with the words 'Everything for Singapore must be left HERE.' It's a little thing, but it brings home that despite the glamour and technology of F1, the Lotus Renault Grand Prix factory is still just that: a factory.

In a way, the factory is a reflection of the cars it creates. The latest technology utilised by highly skilled people, all carefully integrated and managed to create a small number of finely-tuned prototype cars each year. The speed at which refinements are made is staggering, with stories of parts being revised mid-season just days before a race that the current parts will fail at. It's no wonder that Lotus Renault have Boeing as a technical partner, who utilise both LRGP's experience in cutting-edge design and technology, but also their ability to quickly understand a problem and develop a solution.

It was a tremendous privilege to get to see the inner workings of the team, and not something I'll forget in a hurry. The only downside of the experience was not being allowed to have a go in an F1 car…